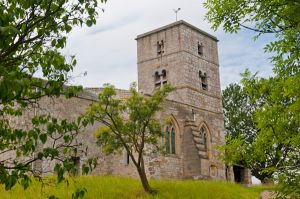 A lovely Saxon church standing on high ground looking out over the Vale of Pickering, All Saints somehow managed to escape the worst excesses of Victorian restorers. There may have been a pre-Christian temple on the site, and we know that the Romans had a burial ground here.

The first written reference to a church at Appleton is in a 12th century charter of Henry II when the church was in the hands of the Abbey of St Albans.

All Saints church boasts one of the finest Pre-Conquest towers in northern England. The lower two sections of the tower date from the first half of the 11th century, while the top stage was added by the Normans.

The interior boasts a simple Norman tub font. The tower arch is Norman, while the nave arches are Early English, dating from 1175-1200 when the north aisle was added. A south aisle was added about 1300, and a chantry chapel was founded by Sir Thomas de Boulton in 1346. A piscina in the south suggests the location of the De Boulton chantry.

The small section of stained glass at the top of the east window depicts the arms of the Greystock family, owners of Henderskelfe (now Castle Howard). This is the only fragment of medieval glass in the church and dates to the 13th or 14th century.

In the sanctuary are two worn 14th-century effigies of ladies from the Boulton family. The effigy to the north of the altar has two heraldic shields on her robe with the Boulton arms. This figure dates to the latter half of the 13th century and may depict Alienore de Boulton.

The second, southernmost effigy dates from the first half of the 14th century and may be that of Hawise de Boulton, mother of Sir Thomas who founded the chantry, and daughter of Alienore. An alternative interpretation is that the figure represents one of Sir Thomas's two wives, Alice de Boulton or Clementia Constable.

More self catering near Appleton-le-Street, All Saints Church >>

More bed and breakfasts near Appleton-le-Street, All Saints Church >>