HERITAGE HIGHLIGHTS:   Superb late medieval carved screen, one of the best in Wales 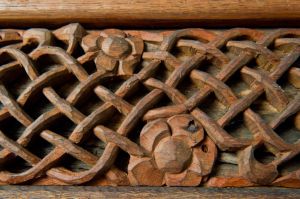 The small church of Llananno sits in isolation, slumbering away the years without a nearby village, despite the proximity of the busy A483 immediately beside the churchyard. The dedication is to Anno, a saint who is virtually unknown. The church dates to the medieval period, though much of the current structure is a product of a comprehensive Victorian restoration.

It is not the Victorian work that makes Llananno church so satisfying to visit, however, it is a superbly carved late medieval rood screen, one of the finest in Wales, and indeed, the equal of any in England.

Not only does the exquisitely crafted screen survive practically unaltered, but it also retains its rood loft, most unusually for Wales. The screen dates to the late 15th or early 16th century and was fashioned by a group of craftsmen known as the Newtown School.

There is so much detailed carving on the screen that it is hard to know where to begin! The bressummer, or large beam supporting the parapet, has a carving of an allegorical, two-headed dragon-like creature known as an amphisbaena. 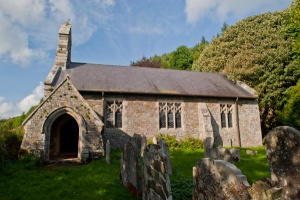 The amphisbaena represents Satan in his attempts to devour the vine, represent Christ and the Christian church. The reverse (chancel side) of the bressummer has bold and much simpler designs of trailing vines.

The headbeam is carved with intricate patterns of leaves and flowers above ten bays carved in a variety of finely crafted designs. Perhaps the finest carving is on the chancel side of the rood beam, with an interlaced pattern and fascinating, delicate water plants.

The underside of the loft has several fascinating carved head bosses, including one of a tonsured monk, a two-headed 'duociput' representing God the Father and God the Son. The loft itself is decorated with beautifully carved figures of Biblical characters from both the New and Old Testaments.

Aside from the rood screen, other historic features include the hatchment of John Stephens, High Sheriff of Radnorshire, a medieval water stoup, a beautifully carved 17th-century vestry made from a 17th-century warden's box pew. This is carved with simple rosettes and an inscription dated 1681.

As interesting as these other features are, it is the superb screen that makes Llananno church well worth visit.

Note
Despite the fact that most guidebooks list Llandadarn Fynydd as the location of Llananno church, the church is actually located over three miles south, on the A483, directly beside a large layby on the west side of the road.

About Llananno Church
Address: A483, Llanbadarn Fynydd, Powys, Wales
Attraction Type: Historic Church
Location: On the A483, three miles south of Llanbadarn Fynydd. Parking in a large layby on the south-west side of the road.
Location map
Llananno Church Photos
OS: SO095743
Photo Credit: David Ross and Britain Express

More self catering near Llananno Church >> 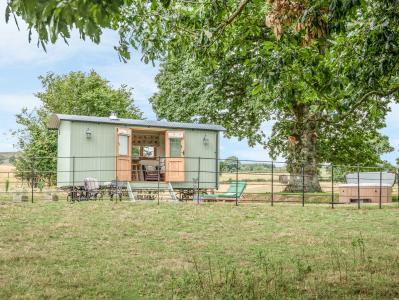 A sheperd's hut placed within the Powys village of Llanbadarn Fynydd, it sleeps two people within studio accommodation.
Sleeps 2 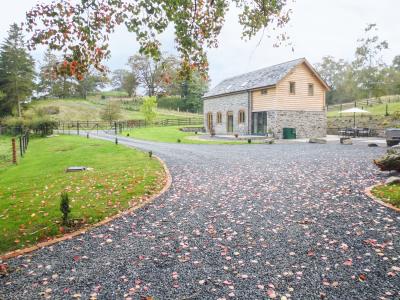 A detached barn conversion located in the Powys village of Llanbadarn Fynydd, it can sleep six people in three bedrooms.
Sleeps 6