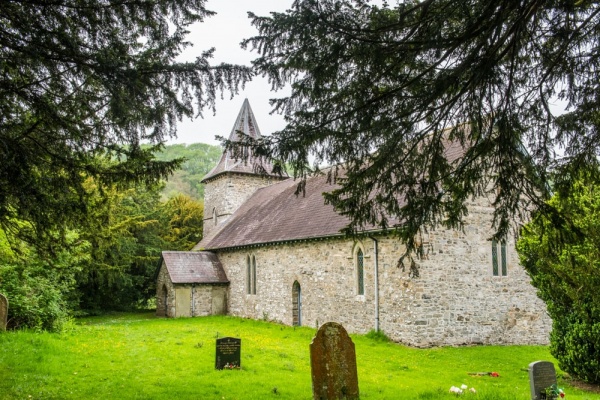 The restored medieval church of Llanfihangel Cefnllys (Church of St Michael of the Ridge Court) stands in a glorious countryside location at the foot of Cefnllys Castle, the 13th-century fortress built by Roger Mortimer, Earl of Wigmore on a site once occupied by the Princes of South Wales. The castle was made the seat of the Court of the Lord Marchers, administering cruel justice over the unfortunate Welsh natives. It was the presence of this court that probably gave the name Cefnllys to the location.

The church almost certainly predates the ruined castle. The circular shape of the churchyard and the dedication to St Michael suggests that the church was founded in the 10th or, at the latest, in the 11th century, long before the coming of the Normans to Wales. The church's age is emphasised by the row of ancient yew trees that mark the churchyard boundary. The yews are thought to be over 1,000 years old.

The church was probably rebuilt in 1242 at the same time that Mortimer was enlarging the hilltop castle, but the earliest written evidence of a church here comes from 1291.

A settlement grew up around the castle and both the church and village became prosperous under Norman rule. The village was declared a royal borough and given a market charter, another mark of its importance. 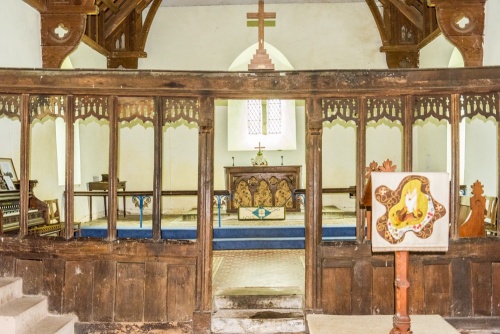 By the end of the medieval period the castle lay in ruins and the village had diminished into little more than a quiet hamlet. Almost nothing remains of the village today, and even the once-mighty castle is nothing more than piles of loose stones on the ridge overlooking the church.

It is hard to visit Llanfihangel Cefnllys today and imagine that the church once served a busy village, with its own market and the right to send MPs to Parliament. Today the church looks forlorn, cut off from the outside world. And it is, indeed, cut off, for there is no vehicular access. The only way to reach the church is to park on the far side of the River Ithon and walk over a bridge and across fields, accompanied only by the sound of sheep grazing.

A visitor in 1833 described the church as 'romantically situated on a precipitous knoll embossed amid higher hills, and is somewhat difficult of access in winter'.

Most of the present church is 13th century. The oldest feature is an unadorned octagonal Norman font, set upon a stepped base. The church retains its late medieval painted screen, divided into 6 sections either side of the doorway, and featuring lovely carved moulding. The tracery has been restored, and according to the architectural historian Nikolaus Pevsner, it is a poor replacement for the original. 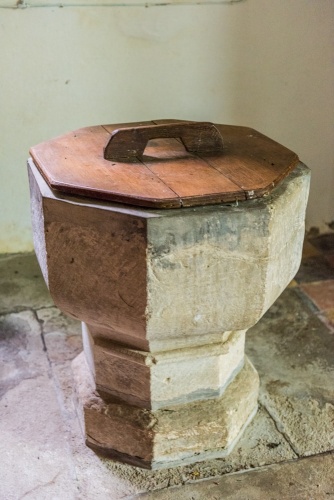 The pulpit dates to 1661 and was made with panels from 17th-century box pews. There are only a few memorials worth noting, one to Rev Thomas Jones (d 1806) and another to John Whittal, who died in 1825.

On the wall is a simple painted wooden plaque commemorating Ezekiel Williams, who died in 1771. Nearby is a very touching memorial to Mary Owen of Gwernarglydd (d. 1865) and of her six children. Three of the children died before surpassing 1 year of age, and none reached 16.

In the porch is a tablet to Thomas Probert, a tailor, who died in 1773 and beside it is a Victorian notice board reminding visitors that from 1885 Hendy Bank Common was reserved for the public in perpetuity as a place where they might enjoy 'air, exercise and recreation on all parts of the lands inclosed except such as shall be planted or cultivated'.

The church is usually open to visitors, and it is well worth the effort to visit, if only for the wonderfully atmospheric location. Though it is remote, the church is still used for monthly services and for a Christmas service each December.

Finding the church is not straightforward. From the centre of Llandrindod Wells take Spa Road East. The road turns into Cefnllys Lane as it leaves Llandrindod. Follow the lane until you reach the picnic area at Shaky Bridge, on the east bank of the River Ithon. There is a free parking area with several picnic tables beside the river. Cross the bridge and bear left along the well-trodden path to St Michael's church. 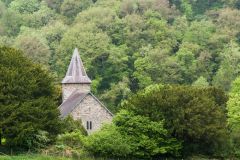 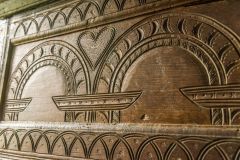 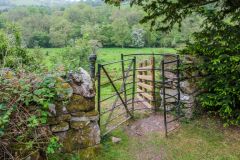