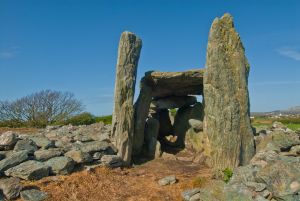 Trefignath Burial Chamber is a funny place; this wonderful prehistoric burial site is located almost immediately beside the busy A55 leading onto Holy Island from Anglesey, and next to a smelting works, which does nothing to add to the ambience!

The juxtaposition of the old and new seems a bit odd, but the burial chamber itself more than makes up for this.

The tomb is of Neolithic date; it was built in three distinct phases, beginning around 3750 BCE and ending over 1500 years later about 2250 BCE.

There are two large upright standing stones, one on either side of the central chamber, which is made of several smaller stones supporting two larger capstones. Another solitary upright stone stands at the 'back' of the chamber.

The chamber itself has been partially restored with bricks. There are remnants of further chambers, though these are not as well preserved. The entire tomb would originally have been covered with turf, but now only a jumble of smaller stones remain.