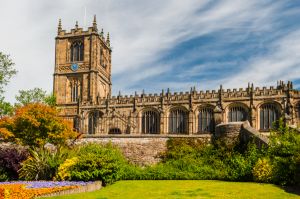 This large 1480's Perpendicular church, built by Margaret Beaufort (mother of Henry Tudor) is considered one of the finest parish churches in Wales. The tower is 18th century, and the chancel is 19th century. The nave has seven bays, and there are a wealth of carved animals, humans, and other figures.
History
The Montalt family built the first church in the late 12th or early 13th century. We know from taxation records that a church existed by 1253.

In 1482 Margaret Beaufort, the Countess of Richmond, married Thomas Stanley, Lord of Mold and King of Man. It was Stanley who, according to tradition, found Richard III's crown on the battlefield at Bosworth and placed it on the head of Margaret's son, Henry Tudor. To celebrate Henry's victory at Bosworth and his accession to the throne, Lady Margaret and her husband rebuilt the earlier medieval church in elegant Perpendicular style.

It is amazing to the think that the impressive building we see today represents only part of the church that Lady Beaufort planned. The original design called for a large clerestory, but this ambitious plan was scaled back. The imposing chancel arch was built, but then blocked for 400 years. Even with these restrictions it still took until around 1597 to complete the church. The west tower was rebuilt in 1773.

The exterior is highly decorated with a frieze of carved figures just below roof level. Among the carved creatures you can spot are a goat, sheep, pig, mole, owl, even an elephant and a whale!

The church is entered through an Elizabethan porch. Once inside, you can see the original aisle roof, though the nave roof is a more modern replacement. The nave arcade is beautifully embellished with carved detail, including a variety of intriguing beasts. The font is Victorian, though in Perpendicular style in keeping with the architecture. Among the most interesting memorials is a brass dated 1602. There are also a series of cartouche tablets from the late 17th century.

Visiting
I actually came to Mold to see the Norman castle, or what is left of it. I wasn't prepared for my first view of St Mary's rising up above the old market place like a queen surveying her subjects. I instantly decided I had to visit the church. Unfortunately, the door was locked and there was no indication of where to find a keyholder. I trotted over to the local tourist information centre, only to be told that the church was usually locked due to several acts of vandalism. It seems such a shame that such an impressive and historic building shouldn't be easier for visitors to explore and appreciate. 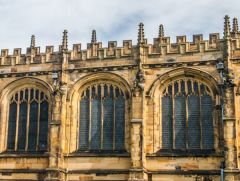 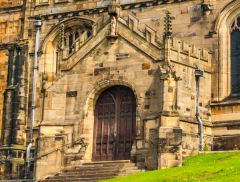 This wonderful stone cottage is located in Gwernymynydd, Wales and can sleep five people in three bedrooms.
Sleeps 5 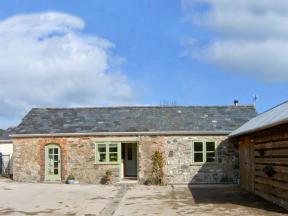 This delightful cottage has been converted from a farm building on the owner's land near Mold, and sleeps up to four people.
Sleeps 4