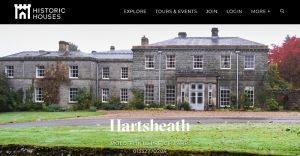 Hartsheath is a Grade II* listed country house in neo-classical style, set in a 19th century landscape park. The house dates to the early 18th century, though heavily rebuilt in the early 19th century.

The Hartsheath estate was owned by the Lloyd family in the early 18th century, and it was probably the Lloyds who were responsible for the first-known house on the site, probably built in 1702. The house was remodelled in the late 18th century, before the estate was purchased by Colonel Wardell.

The house appears to have fallen into ruin quite quickly, and by 1819 was in poor condition.

That's when the Welsh Iron and Coal Mining Company stepped in. The Company called upon a little-known architect named Charles Mathews to design a residence for the company's director, incorporating parts of the earlier building. Mathews had worked with John Nash in London, and was a student of AW Pugin. Despite his famous teachers, Hartsheath is his only known work. The style of the new building seems to have been based on the Shire Hall in Chester.

The Welsh Iron and Coal Mining Company spent 5000 pounds on the new house, but it was money ill spent, for it drained the company coffers, and the firm was forced to close. The new house was then purchased by the Jones family. The only other time it appears on the pages of history is during WWII, when it was requisitioned by the military and used as a base for cartographers working on plans for the D-Day landings.

The drawing room has trompe l'oiel painting decoration with pineapple motifs. The service areas, adapted from the earliest house here, include a servants' hall, butler's pantry, and Victorian kitchens. Under the main house block are vaulted cellars.

The grounds surrounding the historic house comprise a 19th century park with a mix of formal garden terraces and informal gardens. One of the highlights is a Victorian walled garden with walks bounded by flowering cherry trees.

Sadly, Hartsheath appears to now be closed to the public. This page is maintained only for its archival interest. Please DO NOT make plans to visit!

More self catering near Hartsheath Hall

Self Catering near Mold