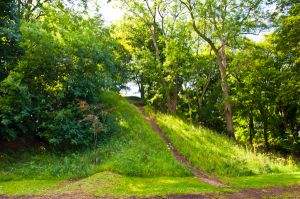 Mold Castle consists of the remains of a Norman motte and bailey timber fortress built upon a natural hill. The first written record of a castle here comes from 1146 but it seems likely the castle we see today was built around 1100.

Mold Castle was the largest of several castle erected by the Normans along the Alyn valley. The castle builders were essentially adventurers, carving out their own small fiefdoms on the edge of Norman-controlled English territory. All we know of the founder of Mold Castle is that he was a Norman soldier named Robert.

Over the course of the 12th-13th centuries the castle changed hands 5 times as the Normans fought with the native Welsh for control of the region. Owain Gwynedd captured it in 1147, and in 1167 Henry II recovered it for the English. The last written record of occupation at the castle comes from 1244. In the early 14th century the area was controlled by the Montalt family, but the last Montalt lord of Mold died in 1329. After this the castle was left to decay, and lost its military importance.

During the Civil War Mold was captured by Parliament, retaken by Royalists, and finally recaptured by Cromwell in 1648. In 1790 Castle Hill was encircled by stone walls by the Mostyn family, and trees planted on the site to create a garden space. In 1890 the site was sold to Mold Council, and in 1920 it was designed as a memorial garden in honour of WWI soldiers from Mold.

The castle is an interesting site, or perhaps more accurately, a complex. At the centre of the site is a naturally occurring glacial mound. A motte, or mound, was raised here within a pair of fortified bailey enclosures. The baileys were defended by timber palisades and gatehouses. The site must have been used for only a short time, for there is no sign that it was ever rebuilt in stone. Traces of masonry can be seen atop the motte, but it seems these must have been later additions. The remains of two stone walls - possibly part of a hall - have been found in the inner bailey.

The main visitor entrance is by the cenotaph off the end of Mold's High Street, beside King's Christian Centre. This takes you inside the outer bailey, where paths lead through a band of trees into the inner bailey. These bailey enclosures would originally have been filled with service buildings of timber, but no sign of these remains.

What certainly does remain is the motte at the top of the inner bailey. This is covered by trees, which rather obscures the layout and makes it hard to get a sense of how the castle site was laid out. The motte is about 60 metres in diameter and 10-14 metres high. The top is about 20 metres across and traces of later masonry can still be seen.

There are two rectilinear enclosures to the south of the mound, with a counterscarp to the north-west. The castle stands somewhat incongruously within a late 17th century garden, with a bowling green nearby.

At the base of the castle hill is the Gorsedd Circle, looking for all the world like a prehistoric stone circle. There's nothing ancient about it, however; it was erected in 1923 when Mold hosted the annual National Eisteddfod.

Mold Castle is a fascinating site. Trees obscure the castle motte, but it is interesting to see how the site planned by the Normans evolved over time and was transformed into a public park. And the Gorsedd Circle adds a sense of history and timelessness to the site. 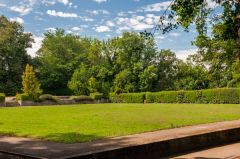 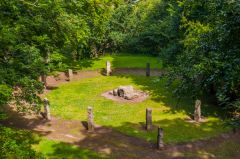 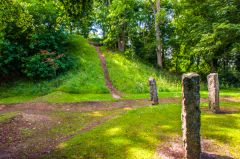 More self catering near Mold Castle >> 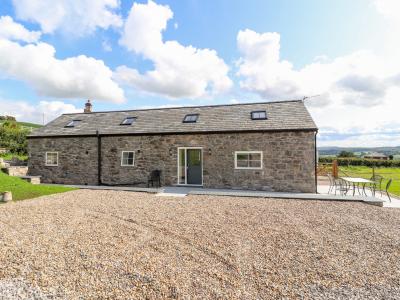 This delightful barn conversion rests near the thriving town of Mold in North Wales and can sleep six people in three bedrooms.
Sleeps 6 This detached cottage rests in Pantymwyn, Wales and can sleep seven people in four bedrooms.
Sleeps 7