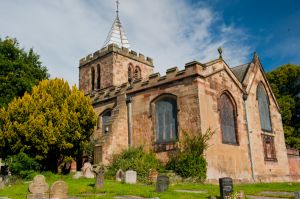 A striking 1857 church known as the burial place of 19th century politician William Gladstone, whose Arts and Crafts marble monument dominates the Gladstone Memorial Chapel. There is a stained glass window by Burne-Jones dated 1898.
History
There was a church at Hawarden since at least the 6th century, though the first record of a rector comes from 1180. The Norman church was restored in 1855, but just 2 years later it was badly damaged in an arson attack. The church was restored again by Sir George Gilbert Scott, who managed to salvage some of the woodwork and stained glass. A porch was added in 1896, blending perfectly with the older structure, and from 1901 a memorial chapel for William Gladstone was added.

The Gladstone Memorial Chapel was designed by John Douglas of Chester to hold a monument to William Gladstone, designed by Sir William Richmond for Gladstone's son, Henry Gladstone. The monument was installed in 1906.

The Gladstone Monument
This truly is a wonderful example of Victorian funeral art and a masterpiece of Arts and Crafts style. The figures of Gladstone and his wife are shown lying, with an angel bending over them to form a canopy. All the figures are carved from white Carrera marble. Around the tomb base are silvered bronze figures, and the tomb itself is made from Sienna marble. 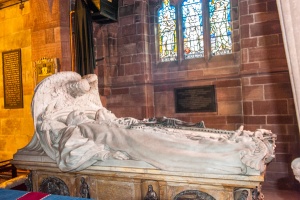 The Gladstone Memorial
The memorial is full of symbolism, an example of Victorian values and romanticism. The Gladstone are depicted lying in a Boat of Life, holding a cross to symbolise faith. Thee is a figure of an owl connoting wisdom, and around the tomb are four of Gladstone's heroes, Aristotle, David, Homer, and Dante - a peculiar mix!

Other recognisable figures are the patron saints of the four British regions at the time of Gladstone's death; St Patrick, St George, St Andrew, and St David. On the north side of the tomb are relief carvings symbolising Mrs Gladstone's qualities of mothering, both to her own children and to the poor and needy.

The Chapel windows were also designed by Sir William Richmond and show more Victorian symbolism, with Biblical scenes of the Annunciation and a Tree of Life. Look for the figures of St Catherine of Sienna and St Elizabeth of Hungary, who were thought to represent good examples of womanly behaviour followed by Mrs Gladstone.

Though the Gladstone Chapel and Memorial will take most of your attention as a visitor, there are certainly other features worth noticing. The oldest monument is a memorial brass dated to 1722, long after this style of memorial had ceased to be popular.

The sedilia is a Victorian restoration of a much early medieval sedilia in Early English style. There is an ornate reredos, designed by Giles Gilbert Scott. Another Scott feature is the rood, dating to 1915 and created in memory of William Glynne Charles Gladstone, who was shot by a sniper while on military service in WWI.

William was the only son of the Prime Minister, and was already an MP and destined for a successful political career like his father. Gladstone's body was only one of a very few British soldiers to be brought back to Britain for burial, and then only after the king personally intervened. His funeral drew an estimated 5,000 mourners, and over 500 people crammed into St Deiniol's church for the memorial service.

Most of the windows are dedicated to members of the Glynne and Gladstone families.

The west window was designed by Morris & Company in 1898 and is the very last window designed by Edward Burne-Jones. Also by Jones - though a copy of an earlier design - is the east window.

Outside in the churchyard is a baluster sundial and a South African War memorial. Immediately beside the church is Gladstone's Library, founded in 1895 by William Gladstone at a personal cost of 40,000 pounds. Gladstone donated his library of 32,000 books to the library, and carried most of them to the site himself in his wheelbarrow from his home at Hawarden Castle.

The church is open daily and is well worth a visit. 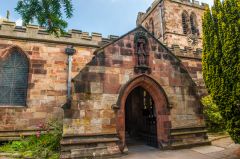 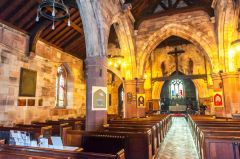 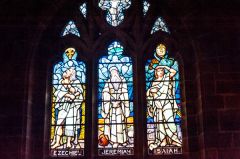 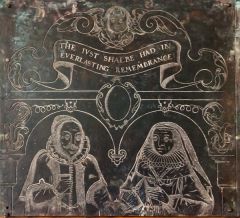 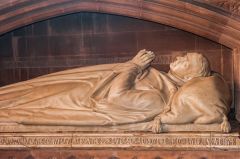 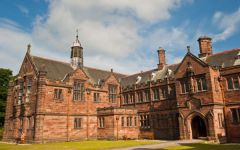