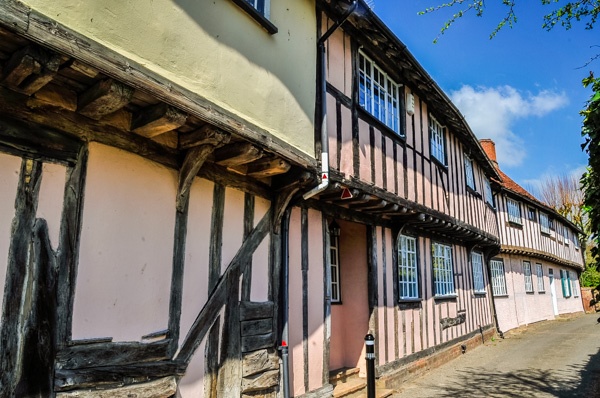 Boxford is a pretty little village between Hadleigh and Sudbury, which gained its name for a ford across the River Box. The A1071 rushes by just south of the village, but blessedly not much much of the traffic makes it way into Boxford, leaving the village to slumber on undisturbed. There are several interesting old timber-framed cottages, and a couple of nice old pubs, but the star of the show for historic buildings is, without doubt, the parish church of St Mary.

This is primarily 15th century, in a mix of Decorated and Perpendicular style. The church features a north porch of wood and one of the grandest south porches in Suffolk. Inside is an unusual painted font cover, and several interesting memorial brasses, including one to a tiny infant.

According to tradition, Boxford is the original village after which Boxford, Massachusetts was named. The association may have been suggested by the fact that just outside the village is Groton, home to the Winthrop family who helped found the Massachusetts colony.

The village was mentioned in the Domesday Book of 1086 when it was recorded as Koddenham. The name lives on in Coddenham Hall, a farmhouse on the site of a Tudor manor house just outside the village.

After the Norman Conquest, William the Conqueror granted the manor of Boxford to William Malet. It is said that the estate was a reward to Mallet for giving William's foe, King Harold, a suitable burial after the Battle of Hastings.

Like so many other places in Suffolk, Boxford grew prosperous on the proceeds to the medieval wool trade, and wealthy wool merchants lavished money on St Mary's church and built some of the attractive timber-framed buildings that still line the village centre. The population of medieval Boxford was much larger than it is today; it was, in reality, a very busy small town. 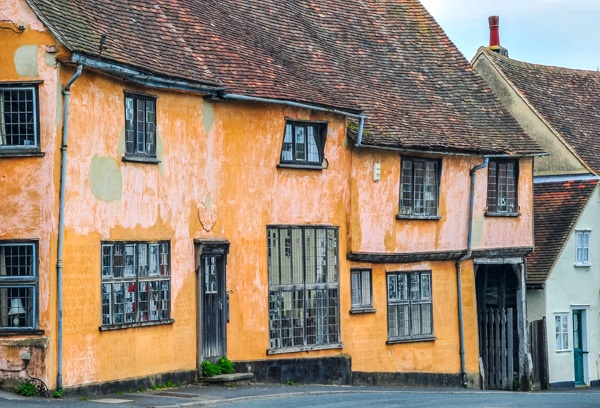 A measure of just how wealthy Boxford was is the fact that at least six local merchants minted their own brass farthing coins between 1648-1672, at a time when the official halfpenny coin minted during the Commonwealth period was not recognised as valid currency by most people.

At least one of the merchants used his coin to promote his Royalist sympathies, which must have been a dangerous move at the time. James Warwell, a wealthy draper, was the son of the rector of Boxford church. The reverse face of his coin depicted a crown and a fleur-de-lys, showing his support to Prince Charles, then in exile in France.

In the early 16th century the village supported no less than four merchant guilds, and the wealthy guild members founded a grammar school around 1560. The school was granted Articles of Incorporation by Elizabeth I, and lasted until the late Victorian period when the school building was converted into a private dwelling. The school stood, not surprisingly, at the top of School Hill.

When the wool trade suffered its decline in the 18th century other industries sprang up, including brewing, parchment manufacture, and glove making, driven by Huguenot refugees from France.

One of the most interesting historic buildings in Boxford is the Fleece Inn on Broad Street. This picturesque former coaching inn dates to the 15th century.

The public bar inside The Fleece is panelled with wood from St Mary's church. Perhaps the most dramatic incident in the long history of The Fleece Inn took place in 1828 when magistrates used the pub's bar as an impromptu courthouse to examine Thomas Corder for his role in the infamous Red Barn Murder. Corder was eventually found guilty and hanged. For more about the Red Barn Murder see or post on Moyses Hall Museum in Bury St Edmunds.

The other pub in Boxford is the White Hart, whose most fascinating landlord was the daredevil motorcycle rider George 'Tornado' Smith. Smith erected a 'Wall of Death' in the inn's beer garden where he performed a death-defying motorcycle stunt. This colourful character kept a lioness and would take her for walks around the village. The lioness is said to be buried beneath the pub's car park.

I would like to acknowledge the contribution of the excellent historical summary published by the official Boxford village website in preparing this article. 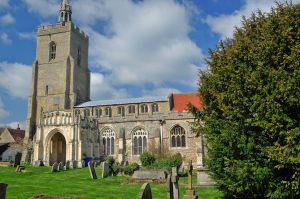 More self catering near Boxford >>

More bed and breakfasts near Boxford >> 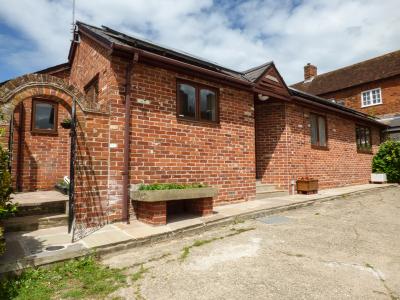 This wonderful cottage is in the village of Boxford near Lavenham in East Anglia and can sleep four people in two bedrooms.
Sleeps 4