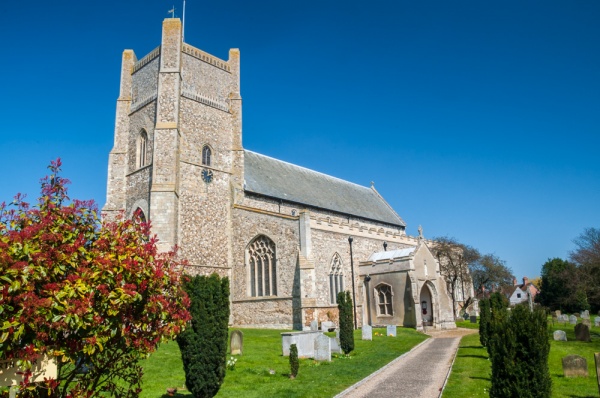 St Bartholomew's Church stands near the market place, on a hill looking down towards Orford Quay, just a few minutes walk from the Norman fortress of Orford Castle. The church owes its existence to the castle, built by Henry II. The castle turned Orford from a quiet fishing village into an important royal centre, and the village population swelled. The larger settlement required a church, and the result was St Bartholomew's, built in the late 12th century, between 1165-1173.

The Norman church was a cruciform building with a large central tower over the crossing. Around 1320 the growing community demanded a larger nave, so the central tower and chancel were torn down, the nave enlarged, and a new tower built at the west end of the nave.

In the early 18th century the Norman chancel was walled off from the 14th-century nave and allowed to decay. The remains of the 12th-century chancel walls stand outside the east end of the church, and contain excellent examples of Norman stonework.

The 14th-century tower collapsed in 1830 and was not fully restored until the late 20th century. 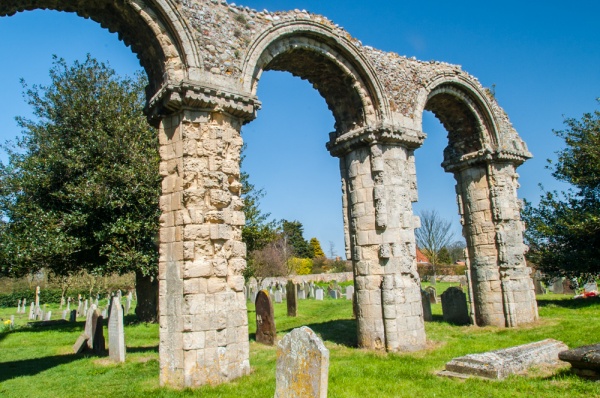 Ruins of the 12th-century chancel

Several Norman pillars and carved capitals remain in the nave. Near the south door is a parish chest dated 1624, secured by five locks. On the west wall, near the door, is a charity board commemorating the 1834 gift of Thomas Brett, who left money to support poor widows on Orford parish. Two more 18th-century charity boards are on the north wall.

There are some exceptional Victorian furnishings, including the colourful screen, which stretches the entire width of the church. The oak pulpit dates to 1899, and the huge eagle lectern was made by the firm of Jones & Willis in 1891.

At the east end of the south aisle is the St Nicholas Chapel, where you will find a wall monument to Rev. Francis Mason (d. 1621), who served as Chaplain to King James I. Look for the curious 1720 inscription below the memorial by a later rector, Revd. Josiah Alsop, who records that Mason was rector of Orford for 80 years (it was in fact 22 years), and that he was 110 years old when he died (he was in fact 55 years old). 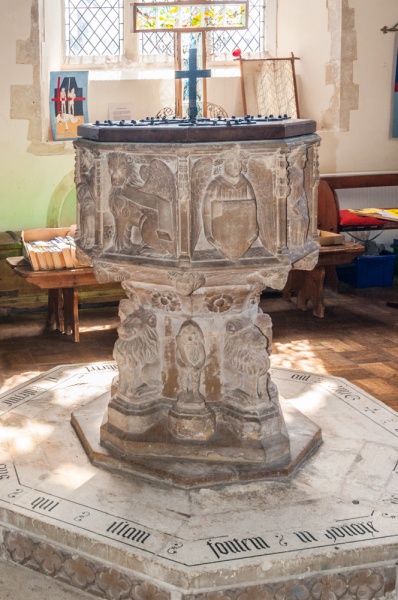 In the chancel is a screen made in 1712, bearing a royal coat of arms to William III. Just east of this screen are sections of an earlier 16th-century rood screen, now acting as a parclose screen to divide the chancel and chapel. Over the altar is an early 16th-century painting of the Holy Family by Bernardino Luini.

The early 15th-century font is beautifully carved with figures of four lions and four woodwoses, or wild men bearing clubs, around the stem. An inscription on the base tells us that the font was given to the church by John and Katherine Cockerell. On the wall are a pair of 18th-century paintings of Moses and Aaron.

St Bartholomew's was a favourite of composer Benjamin Brtten, who enjoyed the excellent acoustics. Several of Britten's church parables were first performed here. In 1958 Britten's popular work ‘Noyes Fludde’ was performed here, and the composer's connection to Orford is commemorated with a striking sculpture given by the Britten-Pears Foundation to mark the 50th anniversary of the famous Aldeburgh Festival. Britten's memorial is a green slate slab in the nave floor.

St Bartholomew's continues to be used for regular musical performances as musicians are continually drawn to the church for its wonderful acoustics. 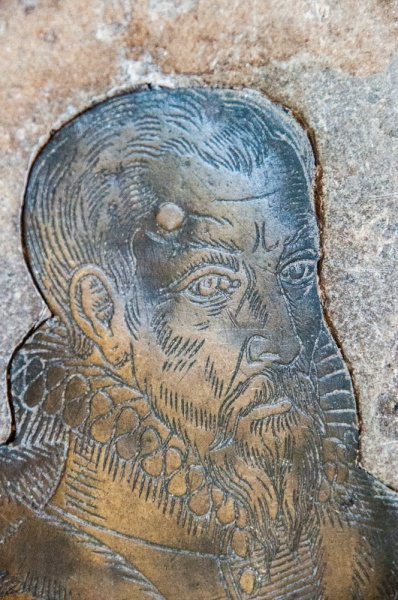 St Bartholomew's is famous for its collection of memorial brasses, which together make up perhaps the best collection in East Anglia. It is remarkable to imagine what the collection of brasses might have been without the destruction wrought by iconoclast William Dowsing, who visited the church in 1643 and destroyed 11 'Popish inscriptions in brasses'. Most of the inscriptions are gone, so we have no idea who the brasses represent.

We do know who several of the brasses represent; in the Chapel of Our Lady in the Wall is a brass to James Coe (Mayor), his wife Elizabeth and their six daughters, dated to the late 16th century. In the same chapel is a brass to Roger Sawyer and his three sons, (c. 1580).

St Bartholomew's is open daily to visitors and was open when we visited. It is extremely easy to find, located just a few minutes walk east of the castle. 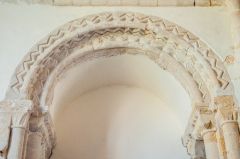 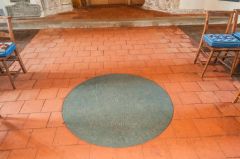 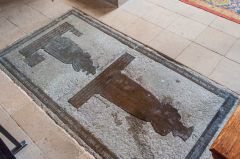 Self Catering near Orford