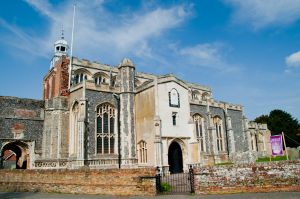 East Bergholt is a sizeable village on the north bank of the River Stour, in the very heart of Constable Country. The association of East Bergholt with the Constable family runs deep; the artist grew up in a now-vanished house a few hundred yards from St Mary's church.

Constable's parents are buried in the churchyard, and there is a memorial to his wife inside the church. St Mary's is a peculiar building in that it has no tower, only a small cupola. The tower was begun in 1525 but the money dried up and it was never finished. As a result, the church bells are housed, upside down, in a 16th-century wooden bellcage in the churchyard.

A short stroll down quiet lanes from the church brings you to Flatford Mill, scene of one of Constable's most famous paintings. The mill is now owned by the National Trust and is one of the most popular visitor attractions in Suffolk.

From Flatford you can take footpaths along the Stour, strolling in Constable's footsteps to the nearby town of Dedham, where he attended school. 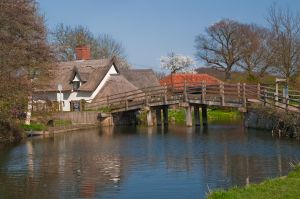 More self catering near East Bergholt >>