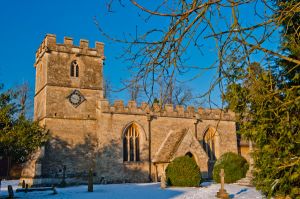 There has been a church at South Leigh since at least the Domesday Book. The first building was probably a Norman chapel built shortly after the Norman Conquest, and St James remained a chapel of Stanton Harcourt until 1869.

The living at South Leigh was granted to Reading Abbey in 1147. When the Abbey was dissolved by Henry VIII in 1539 the church was taken by the crown, but sometime before 1600, it was granted to Oxford diocese.

When South Leigh became a parish in its own right in 1869 the first vicar was Gerard Moultrie. Moultrie decided that his new church needed restoration, and ordered layers of old whitewash stripped from the walls. When the whitewash was removed, what lay beneath was revealed to the light for the first time in over 300 years.

Moultrie's immediate reaction is not recorded, but it would be surprising if his jaw did not drop just a bit, for what lay revealed was a superb set of medieval wall paintings, particularly on the south wall, near the main door into the nave, and over the chancel arch, where a magnificent Doom, or depiction of the Biblical Day of Judgement, was exposed.

Let's take the wall paintings one at a time; immediately east of the south door is a scene showing St Michael and the Virgin Mary. The figure of St Michael holds a scale in one hand for weighing souls, and a huge sword in his other hand.

On one of the scale pans is a dead soul, on the other a devil. Mary drops beads from her rosary into the dead soul's pan to weigh the balance in his favour. Nearby, a massive monster, representing the jaws of hell, waits with his fearsome mouth open wide. If you look closely at this scene you can see that there are actually two paintings, one overlaying the other.

Over the chancel arch is the vividly coloured Doom, a common theme in medieval art. While a pair of angels blow a trumpet call, dead rise up from their graves. On the north wall is a depiction of St Peter standing before a heavenly city to receive the souls, while opposite, on the south wall, are the damned, dragged to hell by demons, while Satan in the guise of a serpent watches and a monster with open jaws stands beside the gates of hell. Not a cheery scene, and one that was intended to be a dire warning to its medieval audience. 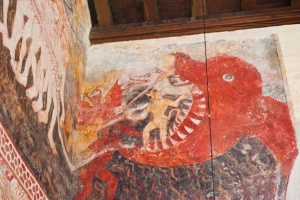 The Mouth of Hell wall painting

Beneath the Doom, on both sides of the arch, is a glorious tangle of foliage dotted with birds. This is clearly a Victorian addition, but traces of original medieval work shows through, suggesting that the Victorians merely embellished what was already there.

The pulpit is almost overshadowed by the paintings above it. It is Jacobean, and has a special claim to fame, for it was from this pulpit that John Wesley preached his first sermon in 1725. Wesley returned in 1771 but was refused entry into the church.

The chancel screen is largely 19th century, but if you look closely you can see traces of original 15th-century tracery in the woodwork. The northern screen is almost certainly 15th century. Much earlier is the chancel, the oldest part of the church. This is mostly Norman, with a Norman south door, and a curious Early English pedestal piscina and aumbry against the south wall.

Immediately south of the east window is another excellent wall painting, showing the Virgin Mary again, holding a lily, while a dove flies over her head. On the north side of the chancel is a small chapel, where some fragments of 15th-century glass have been gathered in the east window.

There are further medieval fragments of stained glass in the windows of the north aisle, where another wall painting can be found, this time depicting St Clement of Rome. At the opposite end of the north aisle is a final painting, a much-worn scene of the Seven Deadly Sins.

At the west end of a nave is a very large organ, with a case by Sebastian Comper. In front of the organ is the 15th-century font, and nearby, against the south wall, is a very finely crafted memorial brass to William Secoll (d. 1557). This was originally covering a tomb in the north aisle but now stands upright against the south wall. The detail of Secoll's costume is wonderful and gives a very good idea of the clothing worn by a well-to-do Elizabethan country gentleman.

Our verdict:
Superb. St James seems so remote, though it lies only a few minutes drive from the busy A40, it might as well belong to a different century. It takes some determination to get to the church, but my goodness it is worthwhile - the paintings are utterly marvellous, though some people might find the Victorian additions distracting.

To my eye, they add to the effect, and give visitors to South Leigh church an idea of what an authentic medieval church must have looked like; full of colour and vivid Biblical illustrations meant to drive home to an illiterate population the Christian message. Well worth a visit. 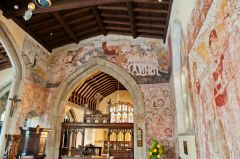 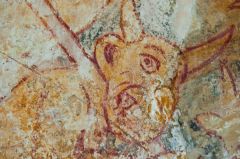 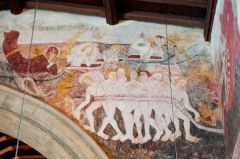 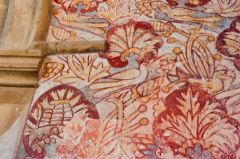 More self catering near South Leigh, St James the Great >>