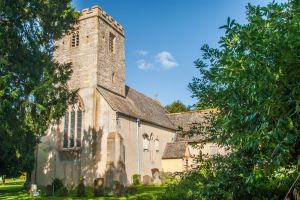 St Denys is a 13th-century church in a small Oxfordshire hamlet not far from the River Thames. Unlike many early medieval parish churches, we actually know a fair bit about the origins of St Denys church at Northmoor.

Land in the manor of Northmoor was owned by the Abbey of St Denis in Paris, France, since the 11th century. The abbey's holdings at Northmoor were administered by the abbey's daughter house at Deerhurst in Gloucestershire.

Around 1145 the Abbey of Reading and the Abbey of St Denis clashed over who should have parochial rights for Northmoor village, and the matter was settled in favour of the French abbey. As part of the settlement, a separate parish of Northmoor was created, and the church that we see today was built shortly after 1148. 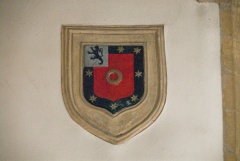 Deerhurst Priory continued to administer Northmoor church until the former was seized by the crown as an 'alien abbey' (i.e. foreign-owned). Thereafter the crown exercised the right of advowson over Northmoor until 1467 when Edward IV granted that right to Tewkesbury Abbey.

In 1555 Sir Thomas White, Lord Mayor of London, and the man most responsible for the building of St John's College, Oxford, purchased the right to revenues of St Denys from the crown. This he used to add to the endowment of the college.

The strong link between St John's and Northmoor is maintained to this day and commemorated in the pair of armorial shields on either side of the east window, which bear the college arms. Another reminder of the link between St John's College and Northmoor is the set of 17th-century altar rails. These were originally donated by Archbishop Laud to St John's College, and they were installed in the college chapel until 1843.

The church is composed of a nave with north and south transepts, chancel, west tower, and south porch. Most of the church dates to the period 1260-1280. In addition, there is a strange structure built onto the exterior of the north wall of the nave that is thought to be a pigeon loft. The Benedictine rule prohibited monks from eating strong meat but could occasionally eat pigeon pie, hence any sensible monk, like those administering Northmoor church, would have been keen to keep a supply of pigeons on hand. 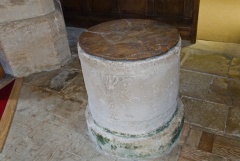 The font is a simple tub shape in Early English style with an intriguing decorative carving that has been variously described as 'a simple sprig of leaves' and as a seven-stemmed fleur de lys.

The latter would suggest a connection with the Abbey of St Denis in Paris, and it is possible that the font came from France. Another reminder of the connection between Northmoor and St Denis is the modern oriflamme, a red pennon that hangs in the south transept.

The original oriflamme, which translates loosely as 'golden flame', hung in the abbey of St Denis in Paris. It was thought to protect the monarch and his men from evil and defeat. During the early medieval period, it was carried into battle by French kings with great ceremony, a custom that was discontinued after it was carried into the Battle of Agincourt, where the French suffered a massive defeat. 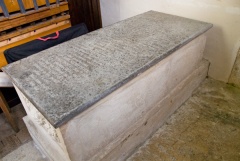 There are three memorials of note in the church, all in the north transept. The transept is cramped and partly blocked by the organ. Immediately upon getting past the organ, you see before you two floor-level canopied niches, each containing an effigy in stone. To the right is an armoured knight, to the left is a lady.

We do not know their identities, but it seems likely they belong to the family of More, who held the manor, and are possibly Sir Thomas More and his wife Isabel. The knight is described in the church brochure as a Knight Templar, though, since no further details are forthcoming you are left to wonder what that identification is based on. He is dressed in typical 13th-century armour, with his feet resting on a lion.

The lady has much more subdued attire, but that is more than made up for by the wall paintings above her head. Here you see a well-preserved series of images which are thought to depict the lady being escorted to heaven by angels.

Between the More tombs is the tomb chest memorial to Sir Edmund Warcupp (d. 1712), a Speaker of the House of Commons and captain in the Parliamentary army in 1659, who later switched sides and helped restore Charles II to the throne.

There are a number of excellent carved corbel heads throughout the church. 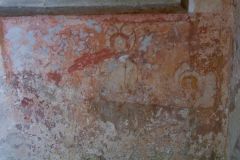 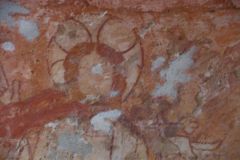 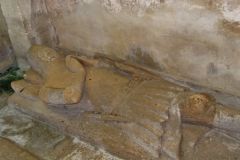 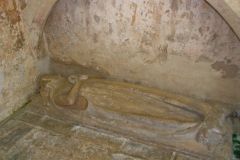 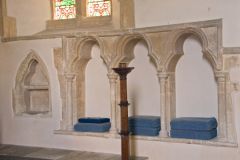