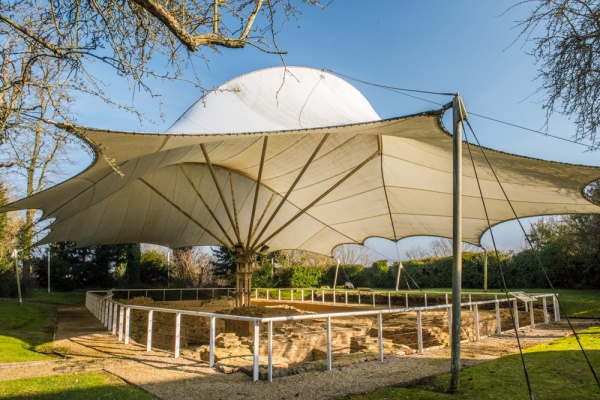 Tucked away in the grounds of Mount House, beside the churchyard of St Mary's church in Witney, is a fascinating historic building known locally as the Bishop's Palace, a name it has held since the 18th century.

To call the building a palace is perhaps overreaching; it is not a palace in the traditional sense but a house that served as the centre of a large estate owned by the Bishops of Winchester since 1044.

The earliest parts of the excavated Palace remains include an early 12th-century solar, or private apartment. That the Bishop could afford private quarters is a mark of his wealth and status at a time when most people would have worked, ate, and slept in the great hall.

The Palace we see today was built between 1110 and 1129 for William Giffard, with a hall and a tower with a private residence. You can see the lower stages of the tower, and the antechamber linking it to the hall. 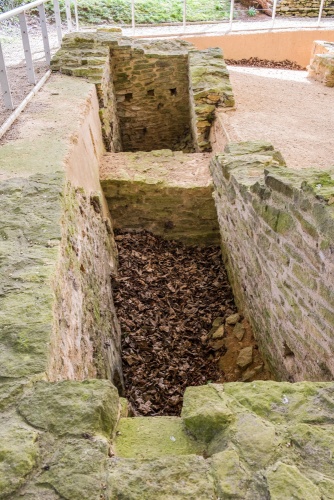 A chapel was added to the complex in the middle of the 12th century by Bishop Henry of Blois, followed by ancillary buildings. The complex of buildings was arranged around a courtyard and defended by a stone wall and a moat.

Bishop Henry transformed what was essentially a country retreat into a palatial complex of buildings suitable for a man of his status. He visited Witney accompanied by a large retinue of church officers, servants, and household officials.

One indication of Bishop Henry's wealth and status is a special lavatory block joined onto the end of the main building. Waste from the upper floors of the lavatory block fell down a chute to a sloping ground floor, and from there flowed through arches to a cesspit, or into the moat. Archaeologists have investigated this area and found clues to the diet enjoyed by the Bishop and his household, with bones of sheep, rabbits, and pigs.

It might seem odd that the Palace was such a grand set of buildings, for the actual Bishop's seat at Winchester was a long way away. Remember, though, that the royal palace at Woodstock, north of Oxford, was only 8 miles distant. The Bishops of Winchester needed an impressive residence to impress their royal neighbours.

We know that they had many opportunities to impress the monarch of the day; King John visited Witney several times, and Henry III visited in 1221. The king must have been keen to impress the Bishop of the day, Peter des Roches, for the royal records show that he spent 20 pounds on clothes for the visit, a vast sum at the time. 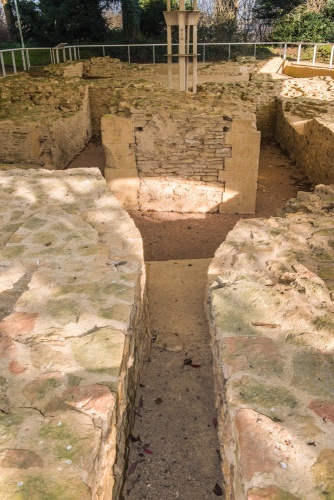 Bishop Henry played a pivotal role in the Civil War between King Stephen and Empress Maud. Though Henry was Stephen's brother he changed sides in the conflict several times. He sensibly strengthened the Palace defences to protect it from attack. He thickened the base of the stone walls and added a stone retaining wall.

He also covered the lancet windows of the lowest chambers, turning them into a lightless cellar. Archaeologists discovered remains of charcoal in the cellars, suggesting that the area was used as a fuel store after it was blocked up.

One window was kept open. It gives onto a stone channel through the earthen mound and provided the only ventilation for the cellar.

In the centre of the cellar is a large square of stone, possibly the foundation of a chimney block running through the main floors to the roof, with fireplaces opening off the chimney at each of the upper chambers.

Though the building is called a Bishop's Palace the Bishop would only have visited from time to time, and the estate would have been managed on his behalf by a steward. But that doesn't mean that the Bishops took no interest in the estate; far from it.

In the early 13th century Peter des Roches took an active role in developing the town of Witney. He laid out the market place and the building plots, or burgages, that surrounded it. 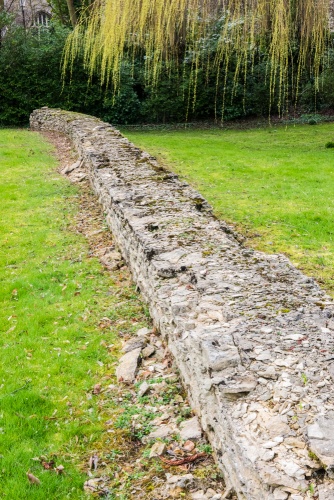 The result of the market and development was that Witney began to prosper, and became a centre for the woollen trade. The Bishops helped establish mills in Witney and from the middle of the 13th century the mills brought in more than the combined rents of the entire parish.

Though Witney flourished in the late medieval period the Bishops visited less often. The last visit seems to have taken place in the late 15th century.

The Bishops leased the Witney estate to the Dukes of Marlborough in 1751. The Dukes, in turn, sublet the former Palace to local merchants. One of the renters was James Grey, a solicitor, who from 1751 tore down the medieval buildings and erected Mount House on the site.

The house passed through the hands of several prominent families engaged in Witney's blanket trade. Then in 1905, it was purchased by James Marriot, owner of the Mount Mills blanket factory. Marriot rebuilt Mount House in its current form. The site was finally sold to the Oxfordshire County Council who use it for offices. 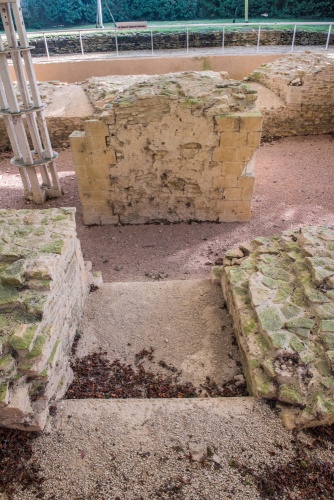 Looking toward the chimney block

The Bishop's Palace is hidden from view around the side of Mount House, and I wouldn't be surprised if many Witney residents aren't aware of its existence. There are no obvious signs until you step inside the grounds of Mount House, and even then it isn't terribly clear where to find the ruins.

If you follow the drive leading to the front entrance of Mount House you will see low stone walls on the lawn to your right. These walls are the remains of foundation walls that formed part of the palace's complex of buildings. An information panel at the side of the lawn explains the layout of the site.

Go through an opening in the hedge behind the information panel and you find yourself standing in front of the excavated remains of the Palace, protected by a peculiar modern awning like a billowing sail that protects the site from the worst of the weather.

There are several more information panels around the outside of the Palace and you can walk around the building, looking down into the excavated remains, though you cannot actually get down into the walled structure.

Our family has visited several times and though it is small, it is fascinating to see and to imagine how it would have looked in its heyday. It is remarkable that the Bishop's Palace is not more widely known.