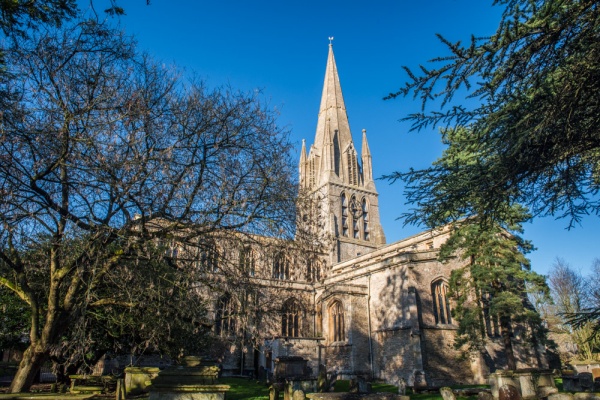 St Mary's church stands at the southern end of a long, wide green, in an oasis of quiet that seems miles removed from the bustle of the High Street shopping area further north. The church dates to the 12th century, though much of the interior is a product of rebuilding in the late medieval period.

The church is notable for its central tower and striking spire, which rises 156 feet. The sheer size of the church is a testament to the wealth of Witney as a centre of commerce throughout the medieval period. 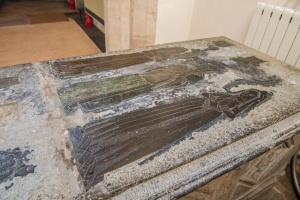 It seems likely that there was a church in Witney as early as the 10th century, but the earliest feature of St Mary's church are narrow 11th century lancet windows in the nave. The church was probably built at the same time as the first stone-built manor house was erected just south of the churchyard and may have been built by, or at least under the influence of, the Bishops of Winchester.

The parish was one of the largest and wealthiest in Oxfordshire. The 11th century church was administered by the Bishop of Winchester, who granted the living to a series of absentee rectors. The absent rectors became a thorny issue for the Bishop, and from the 13th century rectors were made to appoint a vicar who lived in the nearby vicarage. It was not smooth sailing, for in 1520 the churchwardens reported that both rector and vicar were absent, the churchyard was in decay, and the chancel in ruins. 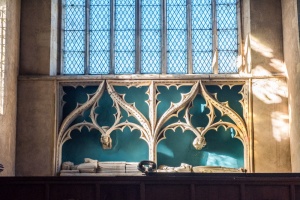 The central tower was a later addition, probably replacing a 12th-century tower at the west end of the nave. A north aisle and porch were added in the late 12th century, and transepts in the 13th century. The church was extended in the 14th century with a pair of chapels, probably built by the same team of masons who worked on Ducklington and Cogges churches.

The medieval church was heavily restored from 1864 by GE Street, prompted by the rector, Francis Cunningham, who wanted to 'gut the church from end to end'. The rector feared that his parishioners would not agree to his restoration plans so he had Street alter the interior in stages.

Unfortunately, the 19th-century restoration swept away many medieval features. One feature to survive the restoration is a 1606 brass to Richard Ashcombe, set into the chancel floor. A Latin inscription translates as; 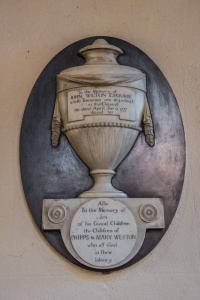 Richard Ashcombe, born and bred in Lyford in the county of Berkshire, (was) most eminently renowned for the modesty and honesty in his way of life; (and) after he had distributed Â£200 to the Poor he gave back his soul to God and his body to the earth for burial here. He died 17 June, in the year of our lord 1606, at the age of 55.

Also in the chancel is a wall plaque to John Wilton, who died in 1777. On the south-west pier of the crossing is a marble monument to a local surgeon named Edward Batt (d. 1853), depicting the Good Samaritan.

In the north nave aisle is a table tomb inset with brasses to Richard Wenman (d. 1534), his wives Christian (d. 1501) and Anne (d. c. 1538), and their children. Richard Wenman was an extremely wealthy wool merchant, and in 1524 it is recorded that he paid 80% of all tax due in Witney. His brass shows him wearing a fur-lined gown with a belt at the waist, from which hangs a heavy purse.

Nearby is a large black marble tomb to Sir Francis Wenman (d. 1640).

St Mary's Church is open daily to visitors. I've visited several times, and can highly recommend it. For a church this size there are perhaps not as many historic features as you might expect, due to the Victorian restoration, but the beautiful nave arcades and the Wenman family tombs are well worth seeing. 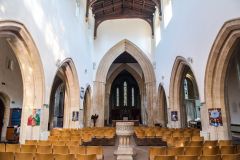 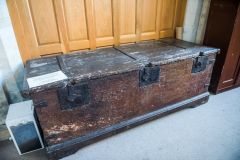