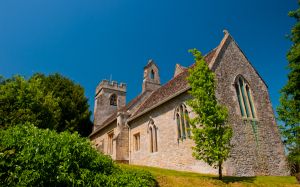 The original building consisted of a nave, chancel, north aisle, porch, and chancel chapel, with a west tower added in the 15th century. The oldest part of the building is the Norman chancel arch, which features lovely beakhead carvings, some of which have rather obviously been recut. Another original feature is a Norman tub font. 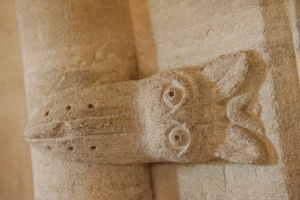 The final major addition, and one of the most historically interesting, came in the 14th century when the north chapel was renovated to create a chantry chapel for Lady Joan Cornwall.

The eastern chantry window has fragments of 14th-century glass similar to some at Merton College, Oxford. The glass features Cornwall coat of arms. When the chantry was built a large arch and gable tomb was added.

Only the canopy of this tomb remains, and it has been moved to a new location against the north wall. Under the canopy is a worn female effigy, which we can assume to be that of Lady Joan. At first glance the tomb canopy appears Victorian, so crisp and clean is the stonework, but in fact, it is probably original, and the wonderful condition owes more to a later recutting than to anything else.

At the west end of the nave are the inner workings of a verge-and-pendulum turret clock. This dates to 1670 and was only removed from the tower in 1980.

If you don't like Victorian restorations of medieval churches then you may not appreciate the chancel. The church was heavily restored in 1883-4 by Collier and Merrin of London, much of the work being funded by Eton College. In 1892 the chancel was repainted by Joseph Piggot to a design by the Hardman Company of London. The result is actually quite pretty, but most definitely to Victorian tastes rather than making any attempt to stay true to the church's medieval origins. 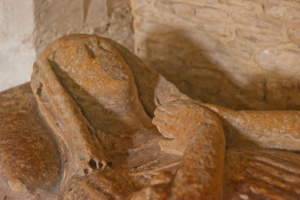 St Nicholas is a very pretty, welcoming church. I've visited on several occasions and always leave refreshed and feeling more peaceful than when I arrived. Stand outside the porch and look uphill to the pretty Cotswold stone frontage of the manor house. It's a timeless view.

The village is idyllic, in a wonderfully scenic area of the Windrush Valley. There are footpaths along the river to Swinbrook and Widford to the west, and to Minster Lovell to the east. And, if you are thirsty, there's a lovely pub in the village, just a few steps from the churchyard!

NB You may find this village listed as Asthal, with one 'L'. The 'll' spelling is more commonly accepted, and that is how it appears on OS maps. 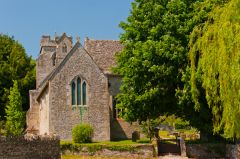 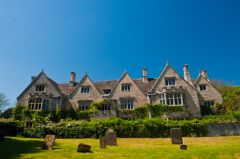 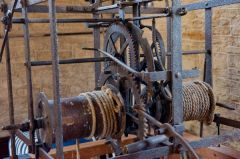 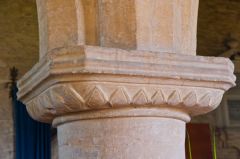 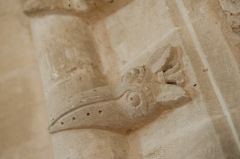 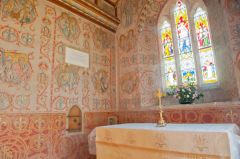 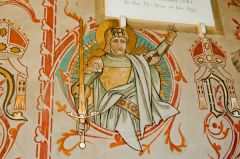 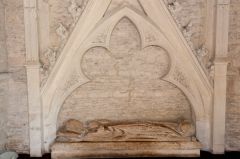