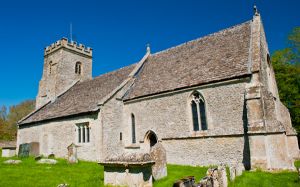 Shilton is one of the prettiest, and most frequently photographed, villages in the Oxfordshire Cotswolds. It lies roughly midway between the old market town of Burford and the more modern town of Carterton, in lovely west Oxfordshire countryside.

There is a pretty pub beside the gently flowing Shill Brook, and a picturesque ford leads across the brook. From the ford, Church Lane curves up the hill to a small shelf of land, on which Holy Rood church stands.

The church at Shilton dates to around 1150. The oldest parts of the current building are the south aisle, nave and arcade. In about 1250 a chancel was added, in Early English style. Finally, a tower was added sometime in the 15th century.

Wide Perpendicular windows were inserted in the nave and aisle in the 16th century, and a full restoration took place in 1884-8 under the direction of GE Street, a specialist in Gothic Revival style. The south aisle has a long, sloping roof, of a type known as 'catslide'. A true catslide roof extends almost to the ground, but the one at Shilton stops well before that point.

There are colourful vestiges of wall paintings on the nave arches and the timber of the aisle wall. The nave arches terminate in carved label stops, one of which depicts a dragon-like creature with duck-bill and teeth, another the head of a king.

By far the most interesting historical feature of Holy Rood is the font. This is quite exquisitely carved, with a wonderful frieze of figures in relief, illustrating the Crucifixion. The carvings are 15th century, though the excellent church guide suggests that the font itself may be much older. There is also a parish chest dated to 1634. The rood screen is modern, but it may incorporate woodwork from the original medieval screen. 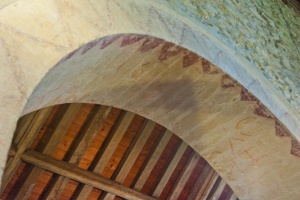 The chancel holds a few interesting surprises. The window nearest the screen has some wonderful diamond-shaped panes of medieval glass. There is a single-basin piscina set into the wall and an interesting wall monument to Griffith Gregory (d. 1702). But the most curious feature of all is not immediately obvious.

Set into the south wall of the chancel, about three feet from the ground, is a carving of a human head, turned sideways. What on earth is it doing there? One theory is that it was set in the wall at just the right height to catch the eye of monks kneeling in prayer.

Before leaving the churchyard, take a moment to walk around the church to find the north door. Though the door itself is modern, there is a belief locally that the lovely iron hinges are original 13th-century work. If so, they are in wonderful condition. Also in the churchyard are examples of round-headed tombs called bales. This type of tomb is thought to be unique to this region. See another example at Asthall, near Burford.

The official church information on the Church of England website doesn't mention whether Holy Rood is open daily, but I suspect this to be the case. It was certainly open when we visited on a sunny Friday morning in May.

Shilton's church is enormously satisfying to visit; a lovely building with a sense of history lingering on every stone. 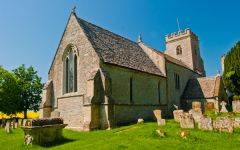 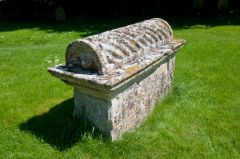 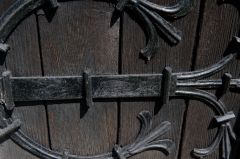 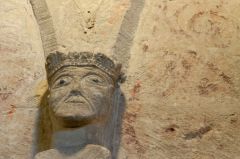 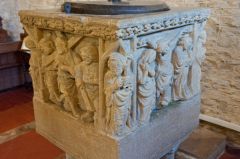 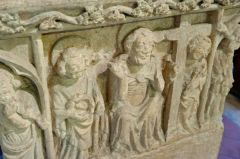