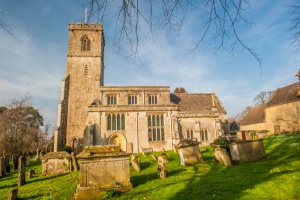 St John the Evangelist church, Taynton
About Taynton's church
Taynton is located at the western extreme of Oxfordshire, just a mile from the market town of Burford, at the edge of the Cotswolds. Tucked away down a quiet lane is the parish church of St John the Evangelist.
The church dates primarily from 1450, though it seems likely it was built on the foundations of an older building. Very unusually the architecture is predominently Decorated style even though the Perpendicular Gothic style was more popular at the time of construction.
The Taynton Quarries
Taynton Stone has been quarried here since early medieval times at least. During the Middle Ages it was highly prized, and used by almost every church with 20 miles of Taynton, and quite a few further afield. Many of the colleges and churches of Oxford used Taynton Stone. Sir Christopher Wren used Taynton Stone in most of his London churches, and to make sure that the stone was properly carved for St Pauls Cathedral he hired his Master Mason from Taynton. 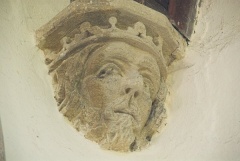 A carved corbel head in the north
transept thought to represent Henry VI
Given this, it is not surprising that Tayoton's church features some superlative examples of stone carving, particularly the font and carved corbel heads in the nave and north transept. The corbel heads depict fascinating examples of the elaborate headwear of the late medieval period. In the north transept are two figures thought to represent King Henry VI and the Abbot of Tewkesbury.
The Harmans
The manor of Taynton once belonged to Tewkesbury Abbey, but at the Dissolution of the Monasteries it was bought by Edmund Harman, and the Harman family vault is under the south aisle. The church informational booklet lists a series of ordinances drawn up by Edmund Harman to keep order amongst his tenants. These are well worth reading for the picture they paint of daily life in the Tudor period. For example, Harman declared

That the miller take not his toll more than he ought to have.

The Font
The font is a marvel; an octagonal bowl with kneeling angels at each corner, and between them figures of beasts, Evangelists, and a mermaid. Beneath this layer of figures is another layer with eight figures of men with their hands on their knees. See our photo gallery for a look at the carving in detail. 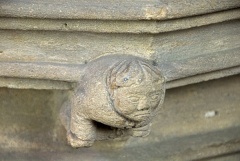 A rather grumpy looking
churchman (a monk?) on the font
Other Heritage Highlights
Over the south door is a beautifully carved and painted royal coat of arms. These have been dated to the period 1714 - 1801. Also on the south wall is a white stone memorial to Thomas Sumner, dated 1624. Against the south wall is a simple oaken parish chest, carved with the date 1609. The wooden roof is decorated with gilded rosettes and a central coiled serpent figure.  Finally, in the churchyard are several excellent examples of 18th century table tombs, and the gravestone of Admiral Thomas Gilbert (d. 1902), ornamented with naval scenes.

If you have time, do take a few minutes to stroll about Taynton village; its a peaceful place, with some very enjoyable older buildings of local stone. 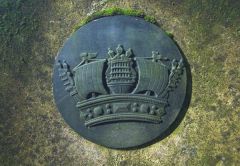 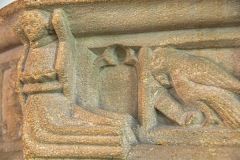 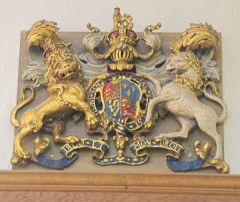 More self catering near Taynton

More bed and breakfasts near Taynton