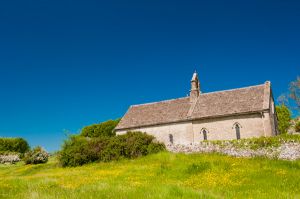 There's not a whole lot to the hamlet of Widford; in fact, it doesn't even appear on some road atlases. OS maps simply show the location as 'Medieval Village of Widford (site of)'. The few houses that together make up what is left of the village stand in rural Cotswold splendour beside the River Windrush, between Swinbrook and the market town of Burford.

On the north side of the river, the road ends in a small layby, and a signed footpath leads across farm fields to the isolated church of St Oswald's.

This is one of the most beautifully situated country churches in Oxfordshire; the location amidst farm fields is idyllic, and though Widford is quite close to the busy A40, no evidence of the outside world intrudes on this lovely spot. St Oswald's is a tiny church comprising of a three-bay nave and a two-bay chancel with a central bellcote.

The first church that we know of was built here in the late Saxon or early Norman period for the monks of St Oswald's Priory in Gloucester. Local tradition suggests that the site marks a place where the monks carrying St Oswald's body from Northumbria to Gloucester stopped to rest in AD 642. 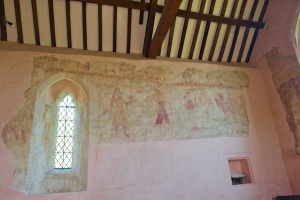 Surviving features from that early church include the chancel arch, carved corbels, and the rustic tub font. Much of the rest of the building dates from the 11th century. The nave and chancel boast considerable remains of 14th-century wall paintings.

There is a figure of St Christopher in his customary place facing the south door, recognisable by his staff. In the chancel is a larger painting of The Kings and the Spectres (a warning of mortality). The pulpit is 15th century and the interior is furnished with early 19th-century box pews.

Much of the appeal of St Oswald's is its simplicity; this is a small country church, with delightfully rustic furnishings and wonderfully evocative medieval wall paintings.

In 1904 it was discovered that Widford's church stands on top of a Roman structure, generally thought to be either a villa or temple. However, the presence of a hypocaust has led English Heritage to suggest that it was actually a bath house connected to a Roman house located near the current Manor Farm House.

For many years a section of Roman tessellated pavement was exposed in the chancel, but so many people took souvenir pieces of the pavement away that the Roman artefacts had to be covered up to preserve them.

St Oswald's is perfectly situated on a footpath along the River Windrush, leading to Swinbrook, Asthall, and eventually, to Minster Lovell and Witney. Our family have taken several walks along this route, and it is one of the most beautiful and peaceful country walks in the Oxfordshire Cotswolds! 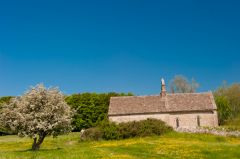 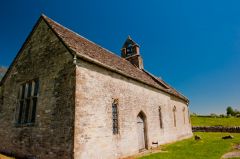 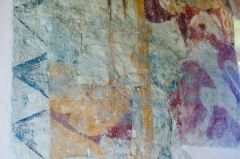 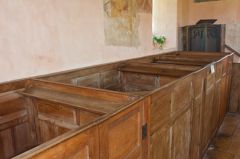 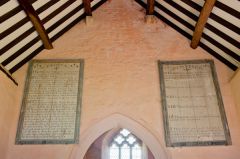 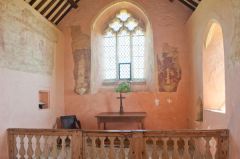 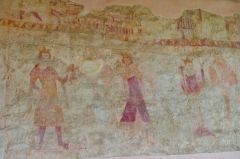 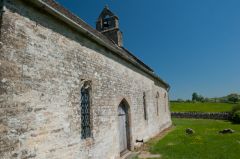 About Widford, St Oswald's Church
Address: Widford, Oxfordshire, England, OX18 4DX
Attraction Type: Historic Church
Location: Access is by footpath only, from the end of the lane on the north side of the River Windrush at Widford (nearest postcode OX18 4DU), or from Swinbrook village to the east. Usually open daylight hours.
Location map
OS: SP273120
Photo Credit: David Ross and Britain Express