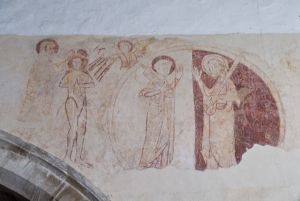 Black Bourton is a drop-dead gorgeous village in the quiet backwaters of West Oxfordshire, tucked away down winding lanes between Carterton and Bampton. St Mary the Virgin parish church is tucked away off Burford Road, in the heart of the village, north of the B2040.

There is nothing immediately spectacular about the exterior; it appears to be just what it is - a lovely Norman church, built in the 12th century, albeit with earlier underpinnings. The church is composed of a west tower, nave with clerestory, small south porch, and a sizable chancel.

The tower is square and squat, with battlemented top, as is common with many churches in this area (for a contrast see Bampton, a few miles away, which has a tall spire).

The pleasures begin before you even reach the south door, for into the south wall of the chancel is set a beautifully carved priest's door, partially remodelled, but retaining lovely Saxon carvings. The door itself is worth a visit, but there is much more to come.

On entering the church via the south door the first thing you see is a tub font, largely unadorned. This is probably 12th century, as is the carved stone pulpit at the eastern end of the nave. But now things get really interesting; as you look up, you see why Black Bourton has gained some measure of renown. The walls on both sides of the nave are decorated with large wall-paintings, primarily in red and orange.

The paintings are 13th-century work. They were lost for many years after the Restoration, covered in whitewash, and were rediscovered by Canon James Lupton in 1866. Lupton's churchwarden and curate recovered the paintings again, against his wishes, and so they remained hidden until re-rediscovered in 1932 by E.W. Tristram. The paintings are extremely well preserved, and most of the details are quite clear.

The paintings cover a variety of Biblical subjects, including a Tree of Jesse, St Christopher, the Baptism of Christ by John the Baptist, the Adoration of the Magi, and the stoning of St Stephen.

There is a small north chapel, in which you will find two interesting monuments to the Hungerford family, Lords of the Manor at Black Bourton. Against the north wall is the monument of Eleanor Hungerford (d. 1592). This is recessed, with a life-sized effigy of the dead woman, overlooked by a scroll with Latin text.

It is interesting to compare that grand Latin memorial to that on the wall monument to one of Eleanor's descendants, Anthony Hungerford (d. 1703). Anthony's memorial is very much English, a sign of how customs and attitudes had changed in the century between the two deaths.

It is worth mentioning the lovely collection of carved corbel heads. These are, in some cases, quite humorous, and I'd like to think they might have depicted local people known to the carvers. All in all, Black Bourton is a delightful country church, well worth taking the time to explore. 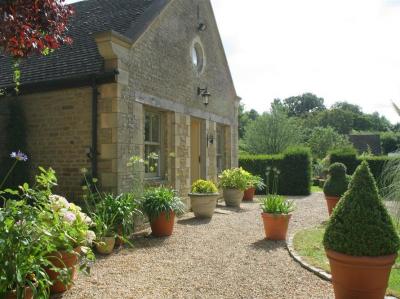 This ground floor, holiday cottage is situated in Black Bourton, Oxfordshire and sleeps two people in one bedroom.
Sleeps 2