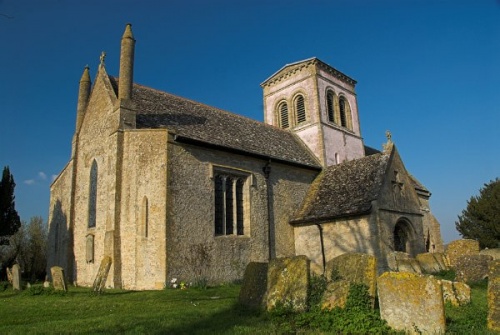 Langford is located in the quiet Shill Valley, between the market towns of Burford and Lechlade on Thames. The manor was once owned by the Saxon Earl of Mercia, but by the 11th century it had passed to King Harold.

The most immediately striking aspect of the church is the square central tower, topped with a hipped roof. I can't bring to mind another church in Oxfordshire with this style of roof, which is frequently used in Saxon architecture. A pilaster strip runs down the south wall of the tower, and at the second-floor level a low relief carving has been inserted into the pilaster. This shows two bearded men wearing short skirts or kilts, and on their heads they bear a sundial.

The nave is extraordinarily high, creating a great sense of space within the church. Immediately to the east of the south door is a mechanical clock, which dates to the 17th century. To the west of the door is an amusing memorial tablet to three members of the Howse family; the punning inscriptions begins, "Within this little Howse three Howses lye". 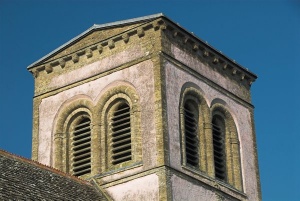 The vestry and the organ chambers are fronted with oak screens which date to the 15th century. The screens are beautifully carved, though the painted panels are modern. The wine-glass style wooden pulpit is another highlight; it dates from the Jacobean period. Unusually, we know its provenance, for the parish records record that Thomas Whiting was paid 8 pounds to create the pulpit in 1673.

Moving to the chancel, the altar is flanked by a 13th-century piscina on the south side, and a six-bay aumbry, also 13th century, on the north side. The size and complexity of the gabled aumbry would indicate that at that time the church had a fair array of plate or relics to display.

Beneath the altar itself is another treasure. Here are the memorial brasses of the Prunes, Walter and Mary. He died in 1594, she in 1607. The detail of the brass is exceptional and shows very clearly the style of dress commonly worn by nobles in the late Elizabethan period. 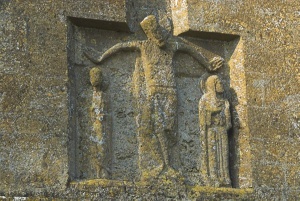 A Saxon carving representing the
Crucifixion, over the south porch

Above the entry to the south porch is this small carving showing a crucifixion scene, with Christ on the cross flanked by Mary and St John. The carving dates from the period 1020 - 1040. It is quite clear that the carving was reused, possibly from an earlier church on this site. Christ's arms drape down, instead of up, and his head is tilted to one side.

These alterations were presumably made to fit the carving into the niche it now occupies. Also, the figures of Mary and St John appear to have been transposed; they are looking away from Christ.

Traditionally, Mary was depicted on the right of Christ and St John on the left. We are left with the conclusion that uneducated masons were faced with the task of reassembling a jigsaw puzzle of carved pieces from an earlier church, and got it wrong. 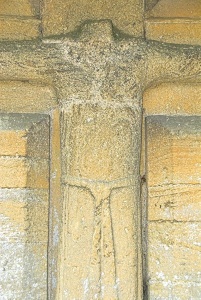 On the east wall of the south porch is a figure of 'Christ in Majesty'. This is known as The Langford Rood and is thought to be unique in England. The figure dates from before the Norman Conquest, though we cannot be more precise than that. The Rood has lost its head, which would not have fit into the niche it is placed in, anyway. The figure is carved completely from limestone and shows great skill in the depiction of the folds of the robe.

Taken as a whole, the architecture and historic interest of St Matthew's church make it one of the most fascinating pre-Norman churches in the entire country, and one that is certainly worth a visit. 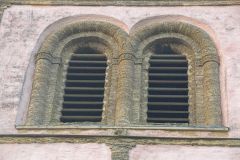 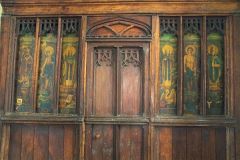 More self catering near Langford

The Riverside - 3 miles
Lechlade, Gloucestershire
From: £30.00

More bed and breakfasts near Langford