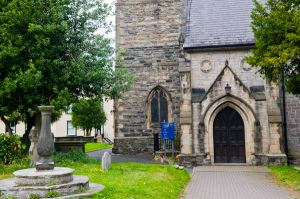 Llangollen, St Collen's Church
Llangollen's church is not only dedicated to St Collen, it was founded by him. Collen was a 6th-century Irish warrior and religious figure who also lived for a time as a hermit on Glastonbury Tor, Somerset. Collen gave his name to the town of Llangollen ('llan' for a church enclosure, and 'gollen' for Collen). An image of Collen can be seen in one of the stained glass windows.

A tomb-shrine to Collen stood in the churchyard until the 19th century, but it was demolished to create space for the current west tower. The core of the church dates to the 13th century, but most of what we see today dates from a renovation in 1864.

The major treasure of St Collen's is the medieval hammer-beam roofs of the nave and north aisle, together forming one of the finest roofs in north Wales. Some stories suggest that the roofs came from nearby Valle Crucis Abbey, but this is debatable.

The roofs are ornamented with figures of angels and fanciful carvings. There is a 14th-century Founder's Tomb in the north aisle and a striking monument in the south aisle to the Ladies of Llangollen (see Plas Newydd). A memorial to the Ladies and their housekeeper Mary Caryll stands outside the church.

In the porch is an 18th-century oak chest with three keyholes; each had to be opened by a churchwarden from one of the three districts within the parish, with separate keys.

St Collen's seems to have intermittent opening hours, even in mid-summer. If it is closed when you visit you can at least take a look at the Ladies of Llangollen memorial near the south-west corner! 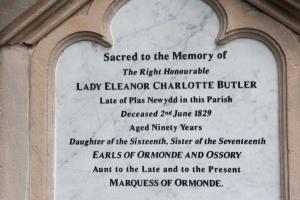 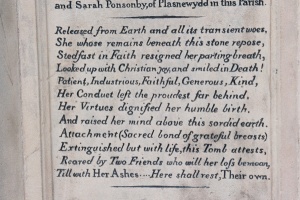 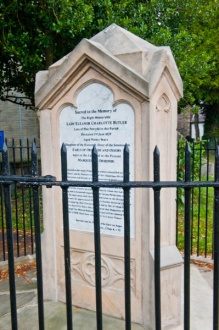 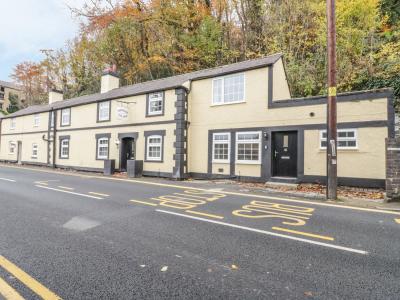 This cottage is situated on the outskirts of Llangollen, near Ruthin, and can sleep four people in two bedrooms.
Sleeps 4 Over the ground and lower ground floor, this lovely cottage in Llantysilio sleeps four people in two bedrooms.
Sleeps 4