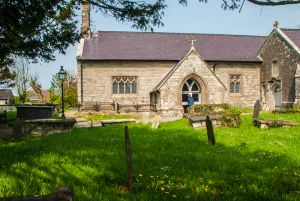 A royal monastery was established at Llangadwaladr around AD 615 by the Kings of Gwynedd, whose power base was just west at Aberffraw. At that time the name was simply 'Eglwys Ael', or Wattle Church. The living of Llangadwaladr church remained in royal hands, being controlled by the English monarch until 1920.

The church is best known as the burial place of King Cadfan of Gwynedd, who died around 625 AD, shortly after the church was established. A carved stone, now built into the north wall, opposite the entrance, is inscribed with a memorial text which reads, 'CATAMANUS REX SAPIENTIS MUS OPINATISM US OMNIUM REG UM', or 'King Cadfan, the Wisest and Most Renowned of All Kings'.

This stone is often called the Cadfan Stone, or, the Catamanus stone (not to be confused with the St Cadfan Stone at Tywyn!). The inscription is a mixture of Roman capitals and half-uncials, which certainly indicates that the court of the kings of Gwynedd was a place of learning in the 7th century, and had clear contacts with Mediterranean culture!

Cadfan's grandson, Cadwaladr the Blessed (Cadwaladr Fendigaid), probably retired to Llangadwaladr to become a monk. When the ex-king died in Rome sometime between 664 and 682, his body was transported back to Eglwys Ael, which was renamed Llangadwaladr in his honour.

The medieval east window is practically the only medieval stained glass on Anglesey, and the centrepiece is a depiction of Cadwaladr.

The exterior of Llangadwaladr church boasts some fascinating grotesque carvings (often erroneously called gargoyles). In the south-east corner of the church is the Bodowen Chapel, added in 1659–61, founded by Colonel Hugh Owen and his wife Ann Williams of Llys Dulas. The west end of the church terminates in a very attractive triple bellcote.

Don't confuse this church with the similarly named church of St Cadwaladr in Llangadwaladr, Powys, near the border with Shropshire. 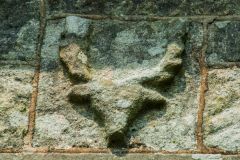