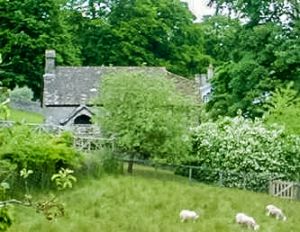 Alltmawr, St Mauritius Church
The pretty church of St Mauritius is one of the smallest churches in Wales, stretching only 35 feet from end to end.

The core of the church was built in the 13th century, though the unusual three-sided apse was added in late Victorian period. Highlights include 18th century box pews, pulpit, and wooden-framed windows. The font is medieval and all the architectural evidence suggests that the church was erected in the early medieval period.

No written records mention the church, so it may simply have been a chapel of ease rather than a full-fledged church. There are quite a few 18th century memorials in the churchyard, the earliest appearing to be rom 1737.

The church may take a bit of finding. It is located up the lane opposite Abernant House, off the A470 between Builth and Erwood. It stands beside Chapel House, a late 19th century Arts and Crafts style house set in large gardens.

The church is usually kept locked.