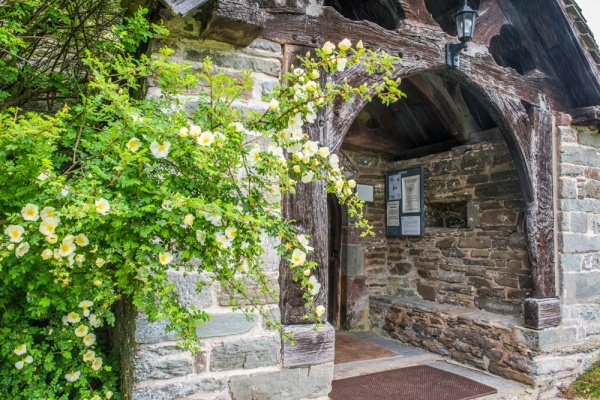 St Mary's is a 13th century church with a 16th century tower and 15th century porch. The church was restored twice in the late Victorian period and again in the early 20th century by Sir Clough Williams-Ellis of Portmeirion fame.

Written records of a church at Crickadarn do not emerge until the late Middle Ages, but the shape of the churchyard suggests a very early medieval foundation, perhaps pre-Norman. If so, nothing of that early church remains, for the earliest part of the current building is the nave, which may date to the 13th century.

The nave must have been rebuilt in the 15th century, but retained its earlier window and door openings. The porch was added at the same time, as was the west tower. The tower was not built atop the existing structure; instead, the west wall of the nave was simply cut away to create an opening to the new structure.

The church must have deteriorated badly after the Reformation, for a report in 1810 describes the architecture as 'vile', and there was no ceiling. The church was completely restored in two phases; in 1867 and again in 1895, when new windows were inserted.

In 1914 Sir Clough Williams-Ellis, better known for his fantasy village of Portmeirion, rebuilt the sanctuary and south nave wall and restored the porch and church roof. The porch still retains its medieval timbers, however.

In the porch is a stone bench, part of which is formed from a reused 1796 gravestone. There are a number of 18th century grave slabs in the nave floor, and under the tower is a Donations board dated 1712. On the north wall is a royal coat of arms showing the Hanoverian heraldic symbols, so possibly to George I.

Crickadarn lies just west off the A470 and can be reached by turning off at Erwood and taking the minor road uphill. The church is in the centre of the village, with easy parking along the road.

When we visited we discovered a group of tourists excitedly exploring the churchyard and the village. When I enquired what they were up to they told me that Crickadarn was the setting for the popular 1981 cult horror film 'An American Werewolf in London'.

Several of the film's most dramatic moments took place in the churchyard of St Mary's, and they showed me where the film's characters had run through the gravestones during a chase scene.

I watched in fascination while they donned werewolf masks and took each others photos in a ferocious pose. Not having seen the film it wasn't quite so exciting for me as it obviously was for them! 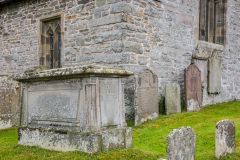 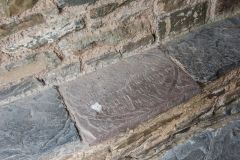 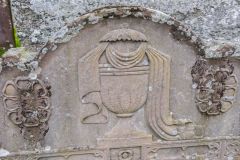