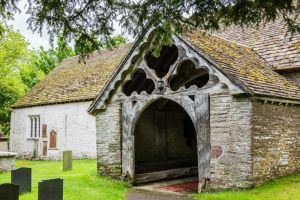 St Cewydd's Church in Aberdew is a mostly medieval church with an open rafter roof, medieval screen, and 19th century Gothic cast iron altar rail. There are 18th-century monuments on the interior and exterior walls.

The first church at Aberedw is thought to have been established in the 6th century, possibly on a site used for pre-Christian worship. St Cewydd established a hermit's cell here, traditionally said to be in Llywelyn’s cave overlooking the River Edw. Cewydd is the patron saint of rain, and there are only 2 other dedications known to him in Wales.

We do not know exactly when the current church was built, but there are documentary records of a church here in 1291. The building we see today is almost certainly later, mostly 15th and 16th century, with a plain rectangular west tower in three stages. The nave may be 14th century, the porch is 15th century, though rebuilt, and the chancel is likely 16th century.

Internally, the most interesting feature is the late medieval screen. There is a tomb slab dated 1604 against the east wall and another dated 1722 on the west wall. On the north chancel wall are a pair of late 18th century memorial brasses, and another 18th century brass is set in a window embrasure on the south wall. 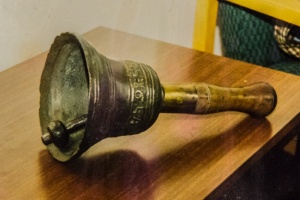 At the back of the church is a fascinating information placard on the Aberedw 'Obit Bell', one of only two known to be in existence. The bell was rung at the head of a funeral procession from the house of a deceased person to the church. An inscription on the bell reads 'Memento Mori: R-S 1654'. The date is remarkable as it was during the rule of Oliver Cromwell, when 'popish' symbols such as bells and other ornaments were banned. The custom of bearing a bell at the front of a funeral procession died out in the 19th century. The bell is now on display at St Fagan's Museum near Cardiff.

Set against the exterior wall of the church is a poignant monument to Catherine Davies, daughter of the church curate, who died in 1709 at the age of just 11 weeks.

In the churchyard are 3 ancient yew trees that may be as much as 1500 years old.

Llywelyn ap Gruffydd was killed nearby, and according to tradition, he attended Mass at Aberedw church on the morning of his death.

Aberedw church is usually open daily to visitors and was open when we visited on a grey and wet May day. 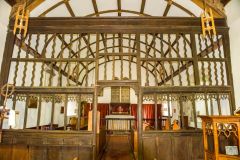 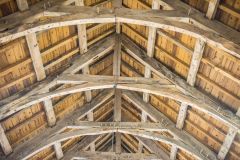 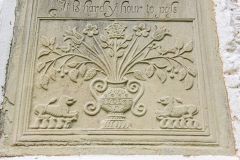