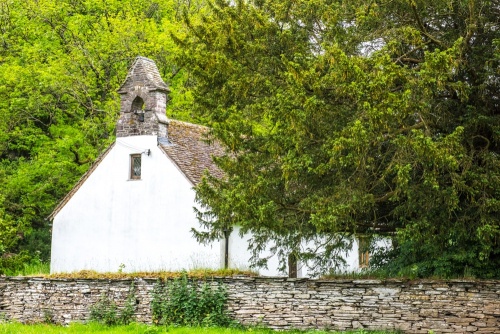 St Padarn's Church began as a chapel attached to the church at nearby Cregrina. It seems to have only become a full-fledged parish church in the early 16th century. The D-shaped churchyard, the location beside the River Edw, and the dedication to Padarn suggest an early medieval origin, however.

The only part of the original medieval church remaining is the south doorway and the very simple 16-sided font. The rest appears to be 17th century, with the wood framed windows inserted in the following century and a belfry added in the late 19th century. The pulpit is 18th century, resting on a stone base.

The floor is made of shale slabs, with whitewashed and plastered walls. The roof is made of 28 closely packed trusses, possibly 14th-15th century, though they may be later. On the north wall is the very indistinct outline of a wall painting, possibly a coat of arms.

On a beam between the nave and chancel is a lath and plaster panel with a faded royal coat of arms. The reverse is painted with a Biblical text. The most interesting monument is an inscribed panel to Evan Evans on the north wall of the nave.

The church is listed Grade II for its historic interest, primarily because the interior has been altered so little since the 18th century.

St Padarn's must be one of the most beautifully situated country churches I've ever visited across Britain. The church stands well back from the narrow country road running through Llanbadarn-y-Garreg hamlet, beside the slow-moving River Edw. It is a scene of idyllic peace.

There are no obvious places to park, but we managed to pull off onto the verge far enough to leave space for passing vehicles, though I don't think any cars passed through the village in the whole time we were exploring the church.

Highlights inside the church that caught our eyes include the whitewashed stone font and the faint but still visible wall painting, but the real historic highlight is the painted coat of arms, high over the aisle. The coat of arms is very faded, but the Biblical text on the reverse (facing the altar) is very clear and bright. 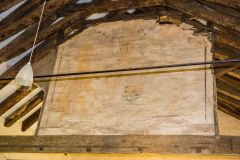 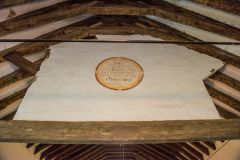 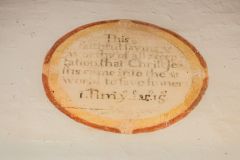