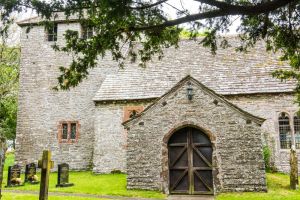 This rural church is set in a wonderfully scenic location, with views to the Black Mountains. The body of the church is 14th century nave, with a font of the same age, and 17th century altar rails.

Like so many churches in Powys, St Teilo's has a very early foundation, possibly as early as the 6th century. The earliest part of the current building is the nave, dated to the 14th century, while the chancel is slightly later. The church was rebuilt in 1897 in Perpendicular Gothic style.

Historic highlights include a 14th century font and piscina, a 15th century barrel-vaulted nave roof, and 17th century altar rails. Under the tower is a 1648 grave slab against the west wall.

The monument that really caught our eye, however, is the memorial to Elizabeth Williams, who died in 1846. The epitaph is typical of the period:

"She lived in faith and, trusting in her God,
Through rough and thorny paths she meekly trod.
She died in peace and, through redeeming grace,
The heaven of heavens is now her dwelling place."

In the porch are 15th century stone benches, a holy water stoup, and original roof timbers. In the floor of the porch is a grave slab from 1735. As you pass through the porch and into the church look for the slots set into the wall beside the doorway arch, made so that a heavy wooden beam could be slid across the opening. It is a reminder of just how turbulent the area along the Welsh border was during the medieval period.

The church is usually open daily for visitors and was open when we visited. Be aware that the lanes leading to Llandeilo Graban village are extremely narrow with very few passing places. That does help the feeling of splendid isolation, but believe me, you wouldn't want to meet someone coming the other way (I speak from experience). 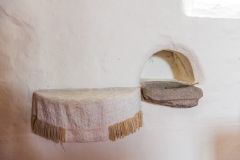 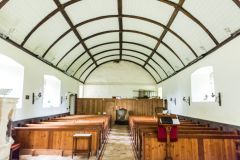