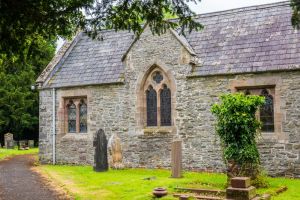 St Matthew's church stands near the River Wye, facing Builth Wells across the river. The church is 14th century with a major Victorian rebuilding. The tower is also 14th century, and there is a carved chancel screen with winged angels.

We do not know when the first church was built here beside the river, but the layout of the churchyard suggests an early medieval origin. It occurs in a tax roll dated 1291, so it must date to at least the 13th century. There was apparently an even earlier church on a hillside at Cae Henllan, half a mile away, but it isn't known when that church was abandoned and St Matthew's built.

The medieval church was heavily restored in 1877 by John Norton of London, and the church today is an excellent example of Victorian Gothic Revival architecture. Though much of what we see is Victorian, the architect managed to retain many medieval features, including the tower, porch, chancel, and north nave wall. The best-preserved feature is the tower, with slit windows showing its medieval origins.

Inside the tower - now used as the vestry - the walls are panelled with reused pieces of box pews. The north arcade is 15th century, and there are several 19th century brasses in the south wall. The chancel screen is modern, but it is beautifully adorned with carvings of angels crafted by a pair of local women, the misses Thomas and Faltin, who also made the choir stalls and pulpit. The earliest pews are at the west end of the nave.

The octagonal font is 15th century, and the colourful east window is by the famous Clayton & Bell firm of London. Standing between the organ chamber and the north aisle is a memorial screen with plaques to Herbert Harrison, a soldier who died fighting in 1880 against the Boers, and JK Glasscodine of the Welch Regiment who was killed in action in 1918.

The church is easy to find; indeed it is almost impossible to miss as you travel along the A483. Unfortunately there is no easy parking place, at least none that we could find. In theory the church is open daily to visitors, though the last time we visited we found the door locked. 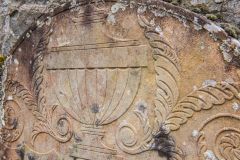