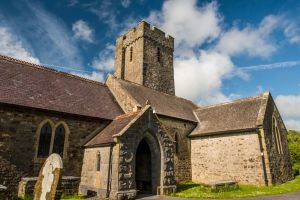 This 12th-century church is built on the site of a much earlier llan, or pre-Norman church enclosure. In 1150 it was granted to the Knights Hospitallers of St John of Jerusalem who had a Preceptory at Slebech.

The church was rebuilt in the 13th century, and again in the late 15th century, possibly by John Elliot of Amroth Castle, who, according to local tradition, built a chantry chapel over his family vault.

The church was heavily rebuilt in 1855, but retains the Amroth Chapel, walls, vaulted roof, and tower from the medieval building. Perhaps the best historic feature inside the church is a late Norman font carved with a foliage design. The font stands on the inverted basin of an earlier font bowl. It is topped by a very good modern cover carved in late Gothic style.

Look for 4 memorial tablets; the first three erected by Rebecca Poyer for her first 3 husbands, the fourth erected for her by her surviving 4th husband! There are 18th-century tablets to the Biddulph family in the chapel. The Biddulphs followed the Elliots as owners of Amroth Castle, and gave the Amroth Chapel to the church in 1889.

In the churchyard are several iron gravestones, made at the same iron foundry as the 1712 bells that used to hang in the tower. In 1929 the three bells were recast into a single large bell at the famous Whitechapel Foundry in London.

To the south of the nave wall stands a 9th century preaching cross. The cross has lost its head, possibly at the time of Cromwell's Commonwealth, and stands upon a three-tiered plinth.

The truth is, we don't know. The name may refer to St Elidur de Stackpole who accompanied Archbishop Baldwin on his 12th-century crusade through Wales. Or he might be a 12th century pilgrim known as Elidyr the Courteous. Or the name might just be the result of a clerical error and refer to St Teilo, also known as Eluid.

Though Amroth village is best known as a seaside resort village the church lies well inland from the sea, near the entrance drive to the National Trust's Colby Woodland Garden. There is a small parking area behind the churchyard. The church is usually open daylight hours and was open when we visited late in the day. 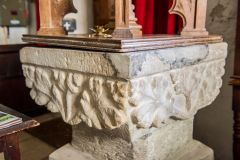 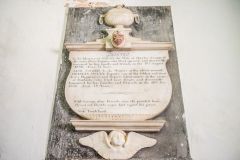 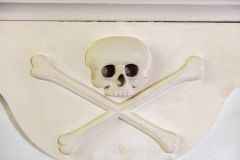 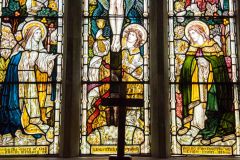 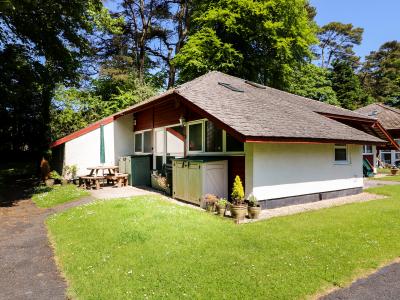 A semi-detached lodge in the village of Amroth in Pembrokeshire that can sleep six people in three bedrooms.
Sleeps 6 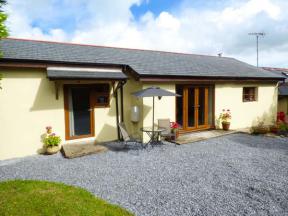 The Hideaway at The Barn

This romantic, ground floor holiday cottage is located in the village of Tavernspite, and can sleep two people in one bedroom.
Sleeps 2