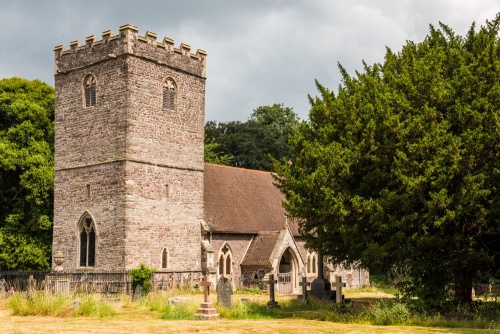 St Brynach's is a 14th-century church, rebuilt in the Victorian period, but housing a carved stone slab dating to the 10th century.

The earliest reference to a church here dates to 1291, but the earliest part of the present building is the tower, which is usually thought to be 13th century due to its very thick walls, but actually is more likely to be 14th-15th century.

The rest of the building - chancel, nave, and porch - are all the result of a comprehensive rebuilding in 1885. The rebuilding was performed by a local builder named William Jones, and is in Decorated Gothic style. 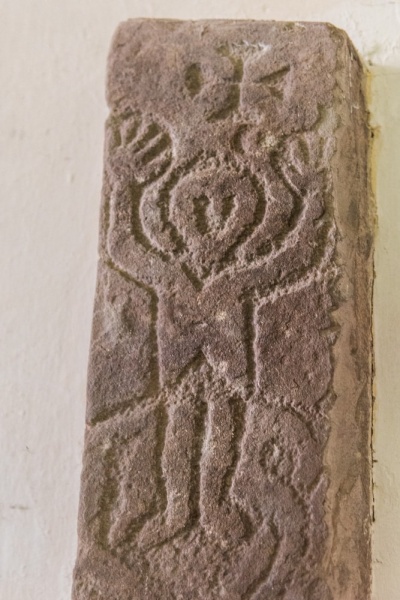 Carved figure on the Llanfrynach Cross

The most interesting historical feature is a 10th-century cross slab at the west end of the church. Though the carving is worn, you can make out a figure with upraised arms at the top, above a Maltese cross, with a small bird beneath the cross. It is easy to miss the cross; we explored the church and didn't even notice it at first. It is set upright against the north wall at the west end of the church, beside a Victorian wall sconce.

The font is also medieval, though it has been recut. It has an octagonal bowl and stands on an octagonal shaft. There are several interesting 18th and 19th-century memorials, including a marble plaque to John Phillips of Tregare (d. 1763).

Most of the remainder of the interior is from the Victorian restoration, which swept away all trace of the medieval structure except for the tower. The restoration also seems to have swept away two further Celtic crosses which are recorded in the 18th century but are no longer to be found. 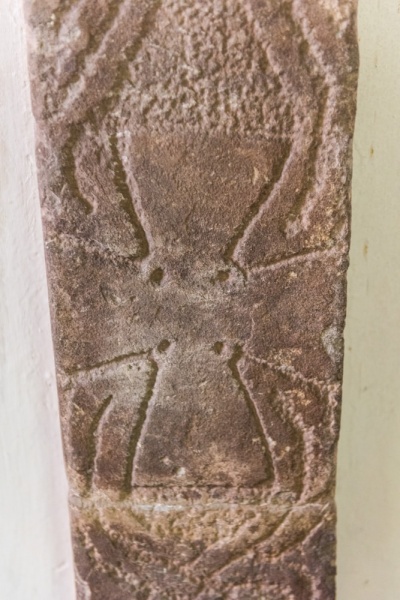 A Maltese cross on the 10th-century Llanfrynach Cross

Other things we noticed include a very nice monument to Charlotte de Winton, who died in 1826. Much older is a simple wall tablet commemorating John Phillips of Tregare (d 1763). There are also memorials to several former rectors including Rev Charles Clifton who died in 1847 at just 44 years old. There are several excellent examples of Victorian stained glass memorials, and some very good 19th-century glazed tiles on the window ledges.

Llanfrynach church is usually open daily and is well worth seeking out. The village is just off the A40 approach to Brecon from the east. 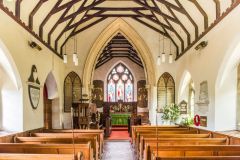