Regimental Museum of The Royal Welsh 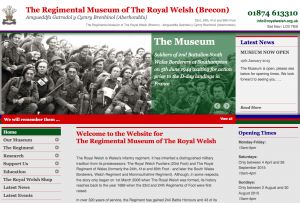 The South Wales Borderers were formed in 1689 by Sir William Dering for William III's campaigns in Ireland. Its first major battles came during the War of Spanish Succession, when John Churchill (later to be named Duke of Marlborough) led them at Blenheim. The regiment served in the American War of Independence, but earned its sphinx badge by serving in Egypt during the Napoleonic Wars.

The museum makes a bold claim; it says it holds the best collection of weapons at any regimental museum in Britain. The gun collection traces the development of soldiers' weaponry from the 18th century to the present day.

The Medal Room
A special area of the museum is the Medal Room, holding over 3000 medals. One display shows replicas of the 18 Victoria Crosses held by the regiment (the originals are too valuable for public display). There is more than just medals on display; you'll learn the individual stories of the soldiers who earned the ultimate accolade for courage.

The museum highlight is the Zulu War Room. The exploits of the 24th Foot Regiment during the 1879 Anglo-Zulu War prompted Queen Victoria to dub them 'the noble 24th'. The regimental tale was dramatised in the 1964 film 'Zulu', and shows how soldiers of the 24th Regiment of Foot won 11 Victoria Crosses during the campaign, including the famous conflicts at Isandhlwana and Rorke's Drift.

The museum tells the story of the South Wales Borderers, Welch Regiment and Monmouthshire Regiment in both world wars. See dioramas of battle sites, uniforms, badges, drums, ammunition, photos, and paintings. See what life was like for a young recruit in the Victorian period, and try on life-sized uniforms.

The museum also holds a huge archive collection of documents, photos, and both personal and official diaries. Much of this archival material has never been published. The archives are available to researchers by appointment.

The museum is open weekdays year round but weekend hours are limited to the summer months.

Nearest Accommodation to Regimental Museum of The Royal Welsh:

More self catering near Regimental Museum of The Royal Welsh >>

More Hotels near Regimental Museum of The Royal Welsh >>

More bed and breakfasts near Regimental Museum of The Royal Welsh >>