HERITAGE HIGHLIGHTS:   A superb medieval church; one of the finest examples of medieval architecture in Wales 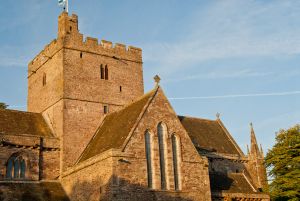 One of the newest cathedrals in Britain, Brecon Cathedral is a medieval church that was raised to cathedral status in 1923. The church survived the Dissolution virtually unaltered, and became the parish church of Brecon. Little now remains of that early Norman church; much of the building we can see today dates from the 13th and 14th centuries.

The chancel is a superb example of Early English architecture, while the later nave is primarily Decorated Gothic in style. Prior to the Dissolution of the Monasteries the church was divided into two parts by a large screen dividing the nave was separating the nave, used by the townsfolk, and the chancel, used by the monks. The huge 'golden rood' screen and the cross that surmounted it became an object of veneration for pilgrims.

One of the treasures of Brecon Cathedral is the 12th-century font, an extraordinarily beautiful bowl font set upon a Victorian base. The bowl is wonderfully carved with birds, beasts, and geometric designs, interspersed with several representations of the pagan 'Green Man' symbol. The date attributed to the font is subject to dispute; the style of the carvings appears to be pre-Conquest, and the font may indeed be much earlier than generally thought.

Very close to the font is a large cresset stone. This stone, the largest left intact in Wales, is a slab dimpled with large depressions intended to hold oil for lighting. It was lost for many years until it was discovered in a garden in Pendre.

The oldest part of the church is the chancel, which features beautiful fan vaulting.

In a chapel off the north aisle is a lovely carved wooden screen created by Thompson of Kilburn, the 'mouse man' carver. Look for the trademark carved mouse low on a panel to the right of the chapel door.

The Harvard Chapel acts as the Regimental Chapel of the South Wales Borderers and houses an impressive display of regimental colours.

The cathedral sits in an attractive close, with other historic buildings surrounding it. The 16th-century tithe barn now acts as a Heritage Centre, with displays on Brecon Cathedral, its history, and architecture. There is also a cafe for visitors.

As of this writing, the cathedral is open every day. There is no charge, but visitors are asked to make a donation. 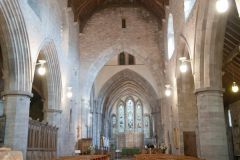 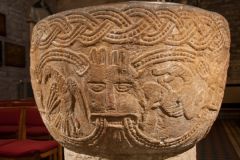 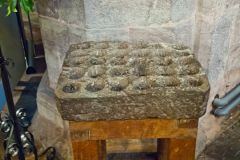 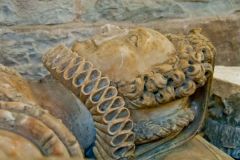 More self catering near Brecon Cathedral >>