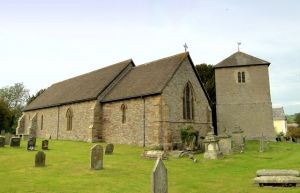 The church at Bronllys probably dates to the 12th-13th centuries and was likely built by the powerful Clifford family, who erected the nearby castle at the same time. The church and most of its estates were later granted to Clifford monastery in Herefordshire, and the monastery retained the church until the Reformation. The first record of a vicar comes from 1400, when David Gomod was named to the post.

The church must have rebuilt at some point in the 14th century, for there is a priests door on the chancel of that date. That doorway is one of the few historical features to survive a comprehensive rebuilding in 1887 by the Nicholson & Sons firm at a total cost of ?1200.

An entirely new church was built upon the foundations of the old, retaining only the base of the foundation walls. The roof and fittings were replaced at the same time, so that the church has a decidedly Victorian feeling to it today.

The most interesting features to survive the Victorian rebuilding include the detached bell tower, though that was restored in 1938. The tower stands, rather unusually, outside the east end of the church. More interesting perhaps is the font, which appears to be the original 12th century one. Another survivor is the 16th century wooden screen, though it was moved in 1969 from the chancel entrance to the west end of the nave to form a vestry.

The timber-framed porch is 16th century, and against the porch wall is a stone Table of Benefactions, listing donors to the church in a beautifully flowing script.

There are 17th-18th century grave slabs in the chancel, and on the south wall is a Victorian sedilia, but the piscina beside it appears to be medieval and could be original. The pulpit dates to around 1700 and was brought here from the church at Llandyfaelog Tre'r Graig. In the churchyard stand a poignant series of small wooden crosses, marking the burial site of those who died at nearby Talgarth Sanatorium and Bronllys Hospital.

The church is a very short distance from the ruins of Bronllys Castle, and its well worth taking the time to visit the castle.