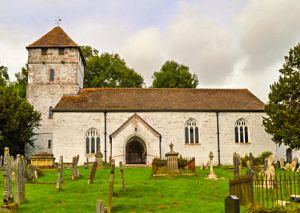 Llandefalle, St Matthew Church
St Matthew's is a large 15th century church on the site of a 6th century Celtic foundation. The tower, south porch and north nave wall are 13th century, and there is a 14th century rood screen and faded fragments of wall paintings.

The first church at Llandefalle was probably established around 500 AD and was dedicated to St Maelog, and you can often find the current church mentioned with that dedication. That first church was rebuilt in stone around 1300 AD, and was substantially rebuilt in the late 15th century.

Unlike many churches in the area it largely escaped Victorian restoration, so retains its 15th century character throughout, with the exception of the upper part of the tower (1661) and south chancel windows from 1700.

During the Middle Ages the church was owned by Clifford Priory, across the border in Herefordshire.

The oldest part of the current building is the west end of the nave and north wall, dated to the late 13th century. The lower part of the tower may be from this time period, but most of the rest is 15th century, though the main doorway in the porch may be 16th century. The nave has a wagon roof, possibly 15th century.

There is a Norman font, perhaps 12th century, but the most interesting historic feature is a very nicely carved 14th century screen, which is missing its rood loft. There are several very good 18th century memorials including those to Thomas Williams (d. 1730) and his wife (d. 1739) and a marble plaque to Thomas Williams of Felin Newydd (d. 1779). The altar rails date to around 1660 and feature balusters in a barley-sugar twist pattern.