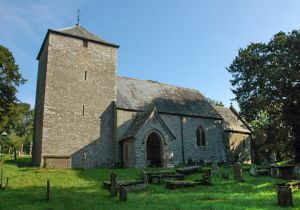 Maelog was the son of a chieftain in what is now south west Scotland, and a brother of St Gildas. The church was founded in the early medieval period but the current building is almost entirely a Victorian rebuilding, save for the west tower, which dates to the 16th century.

The treasure of St Maelog's church is a 10th century Celtic cross-slab, cared with an incised cross, a figure of a warrior, and a Latin inscription. The cross originally stood in the churchyard, but has been moved under the north tower arch inside the church to preserve it from weathering.

The cross stands 8 feet high and has been dated to some time between 900-950 AD. At the top is a Celtic cross, surrounded by a ribbon interlace pattern, and what appears to be a large letter 'S'. Under the cross is the figure of a warrior with a short sword and spear. Under the figure is a Latin inscription, and under this is key-pattern decoration.

The inscription reads 'BRIAMAIL FLOU', or 'The Cross of Briamail'. Who was Briamail? He could be the 6th century St Briavel, a hermit who lived just across the River Wye at St Briavels, Gloucestershire. Or perhaps the inscription refers to St Maelog, after whom the church is named.

There used to be a second carved stone at Llandefaelog. The stone was recorded in the 19th century as being carved with the name 'CATVC', probably a reference to St Cattwg, or Cadoc.

Other historic features include a 13th century font, an ornate Victorian reredos, a pair of 18th century marble monuments against the north wall of the nave, and a group of interesting 16th-17th century grave slabs. In the churchyard is a striking 1816 mausoleum in Egyptian style for the owners of the Penoyre estate.