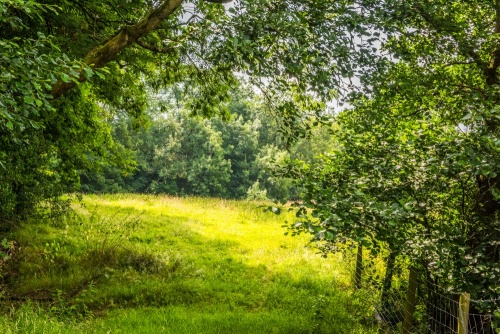 Castell Blaen Llynfi
Castell Blaen Llynfi is the scant late Norman ruins of a large bailey and ditch and a rubble curtain wall. The castle (also known as Blaenllynfi) was built sometime between 1208-1215, and was rebuilt in the middle of the 14th century.

The castle remains consist of a four-sided stone structure within a roughly rectangular moat, measuring approximately 78 metres by 56 metres. There appears to be an entrance at the north angle. Earthworks outside the moat suggest further unknown structures.

NOTE
Though the castle earthworks are clearly visible on OS maps, actually seeing anything worth noting on the ground is not easy. Add to that that the castle site is on private land, with no obvious way to explore the earthworks, makes Castell Blaen Llynfi a bit of a mystery. When our family decided to visit the ruins we pulled off the A40 at Bwlch, onto the B4560.

According to our OS map the castle stands immediately beside the junction of the B4560 at a minor road leading off to the left. There were no signs, and no obvious place to park, but we pulled off to the side of the minor road and walked back and forth along the road, hoping for a glimpse of the earthworks, but the site was so overgrown with trees and shrubs that it was very difficult to get a real sense of the site.