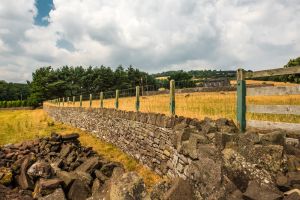 Pen-y-Gaer Roman Fort
Pen-y-Gaer fort was established around AD 70 and remained in use until around AD 130. A modern farm stands within the fort ramparts.

The Roman fort at Pen-y-Gaer farm lies on a small rise roughly halfway along the Roman road between the larger Roman forts at Abergavenny and Brecon. The fort is relative small, measuring about 420 feet by 295 feet, enclosing an area of 2.75 acres.

Excavations within the fort suggest that it went through 3 phases of occupation. It was probably established around AD 70, possibly during the campaigns of Julius Frontinus, governor of Britain. The first phase was a simple enclosure defended by a rampart bank of soil and stone about 25 feet wide with a timber revetment on the outside and a stone kerb inside the bank. 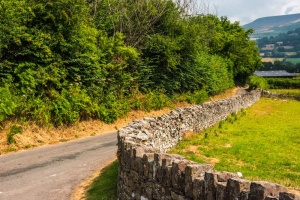 The course of the original Roman road

The second phase of occupation occurred during the reign of Trajan (c. AD 98-117), when the rampart was topped with a stone wall about 3 feet wide.

A final phase of building took place within the next few decades, when the stone wall and rampart was destroyed and a wider wall erected, with an exterior ditch 10 feet wide and 3.5 feet deep. The remains of stone and timber buildings within the fort all date from this early 2nd century phase.

The fort seems to have been abandoned during the reign of Hadrian, roughly around AD 130. The fort was probably occupied by a garrison of foot soldiers, with a nominal strength of 500 men. An aerial survey showed barracks blocks in the western part of the fort, and about 650 feet west is a circular structure that may be a shrine, or tomb.

A pair of carved stones found at nearby Tretower Court seem to have come from the Pen-y-Gaer site. One stone is built into the wall of Ty Lys Farmhouse and bears the inscription 'PEREGRINI FEC', or 'made by the century of the Peregrinus'. The second carved stone is set into the gate pillar leading to Tretower Court. It reads 'VALENTE', presumably meaning 'The century of Valens'. 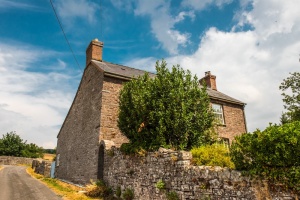 On the south side of the fort are signs of a civilian settlement, or vicus. There are a complex of buildings between Upper Gaer and the fort, and evidence of a strip settlement along the Roman road.

Obvious remains include a rectangular platform with scarped sides. Other than that there is very little to see above ground. It is fair to say that you need a good imagination to make the most of a visit to Pen-y-Gaer; the scant remains above ground do make it difficult to get a real sense of the site, but the location is wonderful.

Do not confuse the Pen-y-Gaer Roman site with the hillfort of the same name near Conwy!

The present Pen-y-gaer Farm lies within the eastern end of the fort, while Greenhill Farm is in the north west corner. The current road presumably follows the couse of the original Roman road. The site lies just north of the A40, 2 miles east of Bwlch and 3 miles west of Tretower Court.