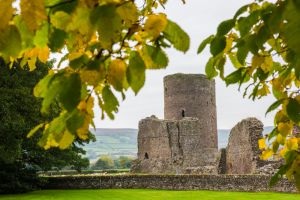 Two historic properties stand within paces of each other in an idyllic rural landscape at Tretower. A ruined castle with 13th century round keep and late medieval garden share the grounds with a 15th century medieval mansion called Tretower Court, which features fine timberwork and a walled courtyard.

Together the two historic buildings, or, more accurately, complexes of linked buildings, show how priorities gradually changed from defence to comfort during the medieval period.

The castle was established during the Norman Conquest of the Brycheiniog area by a nobleman of the Picard family. The initial fortress was a traditional Norman motte and bailey (a mound with a surrounding palisade enclosure) made of earth and timber.

The mound measured approximately 90 feet across at the base, with a ditch some 30 feet across strengthened by a rough stone wall. East of the motte was a triangular bailey, or enclosure, within which stood timber domestic buildings.

Sometime around 1150 a stone shell keep was erected atop the motte, replacing the timber walls. Inside the shell were stone buildings including a hall and solar, or private quarters for roger Picard and his family. The quality of the surviving stonework places Tretower among the finest Romanesque remains of a Norman residence in Wales.

What makes Tretower so impressive is that the quality of the stonework is obviously more than was required for defence; windows and doorways were of a very high standard, a sign that Tretower was much more than a place of refuge, it was a residence and a status symbol.

In 1233 Tretower was attacked by Richard Marshall, Earl of Pembroke, and suffered heavy damage. It was repaired by Roger Picard, who added a large round tower to replace the earlier buildings atop the castle mound. The keep stands 3 storeys high, with a cellar beneath ground. A bridge connected the new tower to the earlier curtain wall of the shell keep.

You can still see the fireplaces and windows on each floor of the tower. The walls and earlier domestic buildings were strengthened to create a wall walk, part of which still survives. Later in the 13th century the entire bailey walls were rebuilt in stone, and much of these enclosing walls still stand, incorporated into the nearby farm. 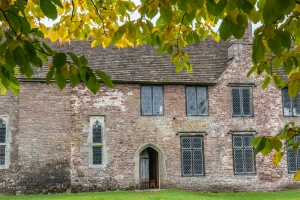 A courtyard house was added to the site in the 14th century, as a desire for comfort overcame the need for defence. Even after the new Court was begun, the castle was still used. Additional buildings were added within the castle walls, perhaps to provide space for a garrison in times of trouble.

After the Picard line died out the castle passed through several owners before the Berkeley family took control. The Berkeley's main residence was at Berkeley Castle in Gloucestershire, but they were responsible for defending Tretower during Owain Glyndwr's rebellion of 1400-1410.

Then in 1415 Tretower served as the local gathering place for soldiers mustering to join Henry V's armies for his invasion of France, an invasion that led to the English victory at Agincourt. Sir Roger Vaughan of Tretower fought at Agincourt, and was knighted on the field of battle before dying of his wounds. The wall hangings in the great hall of Tretower Court show scenes from the Battle of Agincourt.

In the following century the new domestic building was rebuilt by Sir Roger Vaughan. Vaughan's mansion boasts some wonderful timberwork, particularly in the west and north ranges. Robert's son Sir Thomas Vaughan created a wall walk and the impressive gatehouse entrance we se today. Around 1630 new windows in a classical style were inserted in the medieval walls.

The Vaughans supported the House of York in the Wars of the Roses, and when Henry Tudor took the throne as Henry VII the Vaughans actually attacked their own castle at Tretower in rebellion against the new Tudor king. They were reconciled to Henry and returned to settle at Tretower Court. The Vaughan family stopped using Tretower as their main residence in the 17th century and it became a farm, with some parts of the house used as barns. 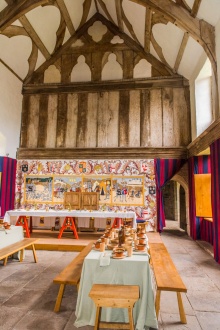 The great hall of
Tretower Court

Beside the manor house is a recreation of a 15th century garden with old roses, a fountain, an orchard, and period flowers.

You access the Tretower site through the imposing medieval gateway, leading to a cobbled courtyard with the Court entrance facing you. On one side an enclosed walkway overlooks the courtyard, and on the other an archway leads through to the recreated garden.

When I visited in late October most of the garden flowers had died away, but what was left gave a wonderful sense of how a garden might have looked in the late medieval period, with small areas divided by a trellised walk and stone paths. Beyond the garden is a small orchard and set into the enclosing walls are bee hives, for honey was an essential material for a medieval household.

From the gardens you climb a small earthwork and you can see the castle, with its circular stone tower, in the distance. Stone walls from the medieval castle have clearly been incorporated into the surrounding farm buildings, giving a wonderful sense of continuity to the site.

The enclosing walls of the shell keep are in partial ruins, and only part of the 16th century gatehouse remains. The exterior of the circular keep is extremely impressive, though you can see large cracks in the walls that make you wonder how it is still upright!

Just outside the tower are the remains of a circular bread oven, and the undercroft of a vaulted solar, or private chambers. The interior of the tower is empty, with only holes in the inner walls showing where floor joists divided the tower into levels. There is one very fine fireplace set into one wall, and you can mount a set of stairs set into the thickness of the wall for a good view over the castle site.

Though the castle would be well worth visiting on its own, it is really the Court that impressed me. The restored interiors are extremely impressive, especially the timber roofs. The great hall has been furnished by CADW to show how it might have looked when the lord and lady were in residence, with tables set for a feast.

Unfortunately there are no information panels, and very little signage, so it was rather difficult to get a sense of how the different parts of the Court were used. You can walk around the entire first floor level, and look down into the courtyard, and also explore the area over the entrance gatehouse.

I was enormously impressed by Tretower; my only regret is that it wasn't a nicer day when I visited so my photos could really show the historic buildings to their best advantage. I can highly recommend a visit; rarely have I seen a site with such a range of historical remains, in such a wonderfully picturesque setting. 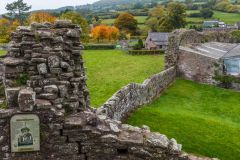 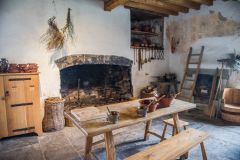 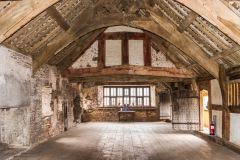 More self catering near Tretower Castle and Court >>

More bed and breakfasts near Tretower Castle and Court >>