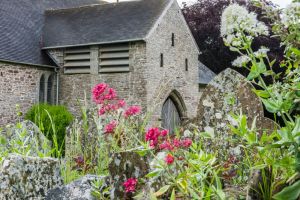 St Eigon's is a 15th-17th century church with some Norman remains and a 14th century porch with a built-in bell-chamber. Highlights include a Norman font and 17th century altar rails.

The oldest part of the church dates to the 13th century, while the chancel and porch are 14th century. There is an original 14th century in the north wall of the sanctuary, with a 16th-century window in the opposite wall. Prior to 1135 Llanigon served as the main church for the Hay area. It was briefly dedicated to St Nicholas in the 16th century, but quickly regained its original dedication.

The church was heavily restored in 1857, and most of the pre-Reformation furnishings were lost. Then in 1887 during a clean-up of the churchyard a carved grave slab of a 13th century priest was found, identified by the floriated cross carved into its surface. Another medieval survivor is a 13th century font.

In 1941 a German bomb caused extensive damage and the church had to be rebuilt once more.

One unusual feature is that the bell-chamber is a small room built above the south porch. Local tradition says that this chamber was once the living quarters for the parish priest. 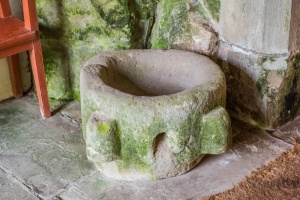 A worn medieval font in the porch

St Eigen may well be the very first female Christian saint. Documentary evidence of her life is scanty and casts some doubt over whether she was actually a real person. According to legend, she lived in the 1st century and may have been taken as a prisoner to Rome with Caradog. When she returned, she set up a religious community called Cor Eurgain (the choir of Eurgain).

But is this quasi-mystical 1st century saint the same one that the Llanigon church is dedicated to? The name is right, but might the church actually be dedicated to Eigion, the brother of St Cynidr, whose church stands in the neighbouring village of Glasbury?

According to our information the church is usually kept locked, which seems very unfortunate! It was certainly locked when we visited, with no signs indicating a nearby keyholder.

We were still able to enter the very odd combination porch and bell-tower. It was extremely unusual to stand in the porch and look up to see heavy bells suspended directly over our heads. The porch is perforated with numerous small holes to let the sound of the bells escape. There are so many holes on the side and front of the porch that it resembles a dovecote.

In the churchyard are several interesting older graves. We found a very finely carved 1783 gravestone to David Lewis of Cwmcoy-nant.

The church is a bit awkward to find. We used the official postcode for our satnav, but that only brought us to the edge of the village. A better postcode is HR3 5QA, which should get you to within a short stroll. The church is located well south of the village centre, on the top of a rise. 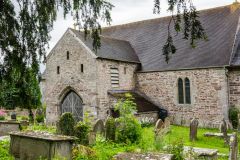 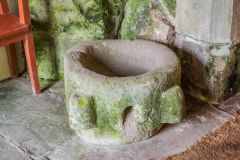 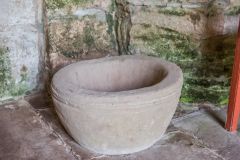 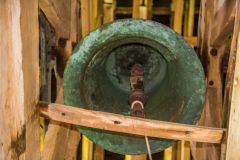 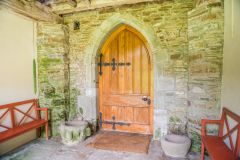