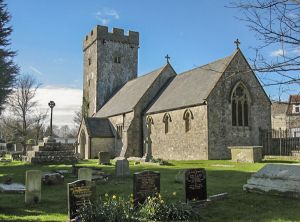 Llanmaes, St Cattwg (St Cadoc) Church
St Cattwg's church dates to 13th century and was built on a much earlier Celtic foundation. Highlights include part of a medieval rood screen, a Norman font, and medieval wall paintings.
History
There may have been a church at Llanmaes as early as the 5th or 6th century. The curvilinear churchyard certainly indicates a very early foundation, but the church we see today was built in the 13th century and comprehensively rebuilt in the late Victorian period. The first written record of a church here comes from 1254, and the tower was rebuilt in 1632.

Historic highlights include a very nicely carved Norman tub font, probably of 12th century date, with a decorated rim. The lower part of the chancel screen is 19th century but the upper part is late medieval and incorporates part of the original 15th century rood screen.

St George Wall Painting
On the north wall is a faded wall painting, representing St George, with a dragon and princess with long blonde hair. The dragon figure is quite worn but you can make out its forked tongue. The princess's parents look down from the upper right of the scene while the saintly knight is at the upper left, with flowing yellow hair and a red cross on either shoulder.

Near the font is an extremely good marble monument of Dr William Towgood and there are several other good 18th and 19th century memorials. Outside in the churchyard is the base of an old preaching cross, used as a pulpit by John Wesley when he came to Llanmaes in 1749.

St Cattwg's is a lovely medieval church, and though much of the interior furnishings are the result of a Victorian restoration, enough interesting medieval features remain to make the church well worth a visit.