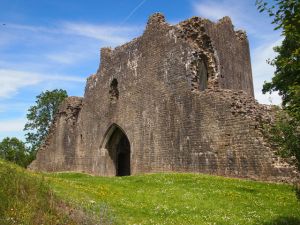 The castle stands on a rocky outcrop above the River Thaw. It was probably erected as a simple earthwork enclosure with a timber palisade by Herbert de St Quintin. Towards the end of the 12th century a strong stone keep was added inside the earthworks.

Then in the 14th century the gatehouse was added, defended by a pair of towers, and two further towers were built at the eastern side of the site. These defences may have been the work of the de Clare family, who came into ownership of Llanblethian in the 13th century.

The final stage of castle construction was begun by Gilbert de Clare in 1307, but when Lord Gilbert died at the Battle of Bannockburn in 1314 construction stopped.

The site was later used by the Lords of Glamorgan, but it gradually fell out of use completely, and by the Victorian period it was being used as a cowshed - an ignominious end for an impressive medieval fortress! It is now a ruined shell, but a very impressive one!