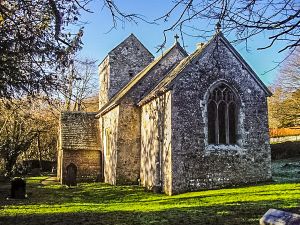 Llanmihangel, St Michael Church
St Michael's is a 13th century church on earlier Norman foundations, in a lovely location beside the Tudor manor of Plas Llanmihangel.
History
There was almost certainly a church here in Norman times, but the first written record dates to 1254 and the earliest part of the current building is 13th century. The west tower was added in the 15th century, and the entire building was restored in the late Victorian period in Perpendicular Gothic style.

The only access to the medieval tower was a external ladder, so in 1909 a staircase turret was added to allow easier access to the belfry. There is a single bell, dated 1636, but what is unusual is a dove core over the belfry, with nesting boxes set into the walls both inside and out.

Despite the Victorian restoration, the interior retains several interesting historic features, including stone benches in the Victorian porch, a 15th century wagon roof decorated with oak panels. There is a Norman piscina in the south chancel wall, and on the north side of the nave is a 13th century font set on a rounded stem. There is a carved stone slab set in the wall, part of an old coffin lid to Griffithe Grant, who died in 1591.

The north nave wall has stone corbels carved with grotesque faces. The most interesting memorial is an early 18th century memorial to the Edwin family, in neo-classical style with cherubic 'putti' and fluted pilaster strips.

St Anne's Well
In the churchyard is the base of a medieval cross, and beyond the west end of the churchyard is St Anne's Well, a medieval holy well with steps leading down to the water and a carved figure of a woman from which the water originally spouted. The well, though possibly linked to the church, may have been built by the lords of the manor. This suggestion is quite plausible as the manor house has other water features in its grounds.

St Michael's has no electricity, and is lit only by oil lamps and candles, adding to the atmosphere.

St Michael's is a pretty late medieval church with interesting earlier features, and is especially interesting for its location beside the Grade I listed manor house. The manor house has a key to the church if it is locked.