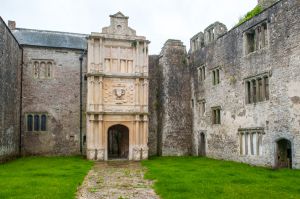 A medieval manor house known for its beautifully carved porch in Renaissance style, Old Beaupre (variously called Old Beaupre Manor or Beaupre Castle) is an L-shaped building constructed in the early 14th century. Not truly a castle, as it seems to have no real military purpose, but was intended from the start as a family home, and a very impressive one at that.

The original buildings at Beaupre were heavily remodelled during the Tudor period by the Basset family, who added an imposing outer gatehouse, the porch, and extended the structure to create a middle courtyard.

The ruined and roofless hall recalls a famous episode when the bard Meurig Dafydd presented a praise poem to William Bassett, lord of Beaupre. According to legend Bassett read the poem, gave the bard a coin as reward, then threw the manuscript into the fire.

Was it modesty, deflecting the bard's praise, or a rather pointed appraisal of Dafydd's poem? We don't know, but the Bassett family had what we might today call 'a bit of a reputation'. They did not get along with their neighbours, and engaged in a series of disputes. Some disputes ended in court cases, others in violence. 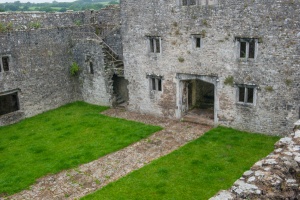 The outer courtyard from the wall walk

To protect themselves and at the same time show off their wealth, the Bassett's added an outer gatehouse in 1586, topped by a parapet walk that gave excellent views over the surrounding fields. The wall walk has been restored, and you can climb to the gatehouse and look out over a landscape that once featured riverside gardens, with orchards and terraced walks.

No further additions followed, as the Basset family fortunes declined after the Civil War. In the 18th century, the castle passed to the Jones family, who chose to make their family seat at New Beaupre, so Old Beaupre went into decline.

Much of Beaupre is ruined, but the exceptional 3 story gatehouse and Tudor porch are well preserved. The 14th-century hall boasts an impressive contemporary fireplace - perhaps it is the same fireplace used by William Bassett to burn Meurig Dafydd's praise poem? 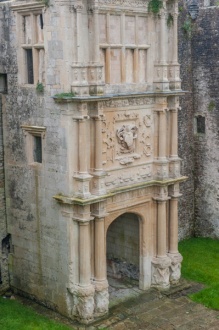 You've heard the expression, 'getting there is half the fun'. I'm not sure getting to Old Beaupre is half the fun, but it certainly is a challenge. The site is really poorly signposted, at least it was when we visited. First of all, if you use the official postcode you will arrive at completely the wrong place, near the parish church in St Mary Church (Llan-fair) village.

Where you really want to be is at a layby on St Athan Road, at OS grid reference ST003722, just before the road forks to Llanblethian and St Hilary. There is a small brown tourist sign, half-hidden by foliage when we visited, pointing the way to a footpath across the fields to the castle.

As soon as you pass through the hedge onto the footpath you will see the ruins of Old Beaupre visible amid trees across the fields. You'll have to cross a couple of stiles, and the ground can be wet after rain, so please wear good waterproof footwear. Now with all those warnings aside, the walk will take no more than 10 minutes and it is very easy, mostly level going.

As an aside, when I enquired of a local woman where to find the castle, I pronounced 'Beaupre' the way it is spelled, sounding like 'bow-pray'. She looked puzzled for a moment and asked if I meant 'Booper' Castle. Er, yes, I apparently did.

Surprisingly complete, though you wouldn't know it. The approach is across several wet fields, from which leather shoes will not save you. It seems fairly plain, with square, roofless buildings.

Apart from the gatehouse and outer wall, it just seems to be a ruined manor - though not totally ruined, as the rear has been converted to a farmhouse, from which music may drift mysteriously. Another strange feature is a little pictographic sign warning of low ceilings, in the gatehouse, which now reads "Danger: Undead".

The residents may have had problems with angry, though living, mobs. Beaupre was simply a manor house until the defensive wall was added in 1586, to protect the family from adversaries in their petty local disputes.

They were not good neighbours, and there were a few duels. Yet despite their miserliness in most matters, the owners of Beaupre were not averse to gambling. Unfortunately for them and the house, they were not good at it.

Many of the windows were blocked up to avoid the window tax, and by 1815 the house had fallen into disrepair mostly because the family could no longer afford it. The one remaining mark of luxury is a large, ornate, 16th-century porch.

This is arguably not ruined by the graffiti inside, some of which is very well carved and dates back to 1719 - before the house was even ruined! The range of messages and fonts is interesting in and of itself.

If you can find this place (it took us a while), the walk is very pleasant. Bring your wellies, and watch out for ... low ceilings. 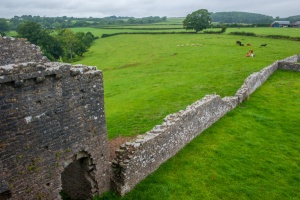 The view from the outer gatehouse wall 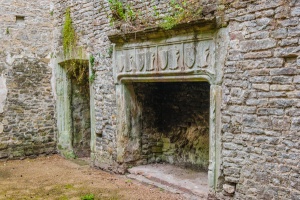 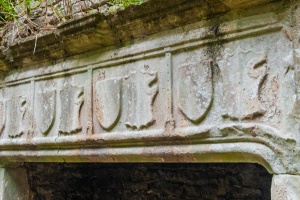 Carving detail on the hall fireplace 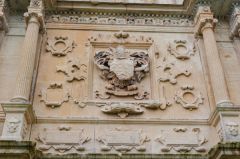 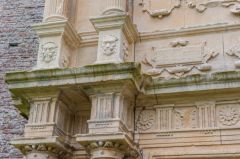