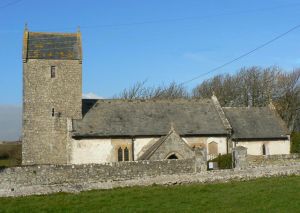 The most interesting historic feature at Marcross is the huge Norman font, like a gigantic barrel, decorated with roll moulding.

On the south side of the chancel is a leper window, allowing afflicted sufferers to view the altar during services. The church has a distinctive saddleback west tower, probably added in the 14th century. Holy Trinity was extensively restored in 1893, and in the process most of the medieval features were lost. One of the new features was a set of attractive encaustic tiles set into the nave floor. You can still see some evidence of whitewash that originally covered the walls.

As far as we are aware the church is normally open daylight hours.