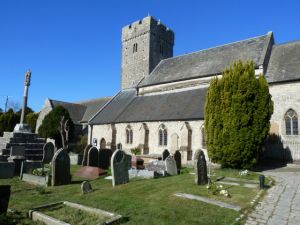 Llantwit Major, St Illtud's Church & Crosses
This fascinating building is really two churches in one, with a history going back to the late 4th century. One half of the church dates to the Norman period, while the other half is 13th century and boasts a series of medieval wall paintings. Look for the special exhibit of 9th-10th century Celtic crosses in the Galilee Chapel.

St Illtud's church can claim to stand on one of the oldest and most revered Christian sites in Britain. In 380 AD the Roma Emperor Theodosius I made Christianity the only official religion throughout his Empire. In 395 AD a college of priests called Cor Tewdws was founded here. According to legend the Emperor himself founded the college, but this may be wishful thinking.

What is clear, however, is that Cor Tewdws was the earliest school in Britain, and arguably the oldest college in the entire world. After the Romans left Britain in the early 5th century the college was left to defend itself against raiders, and in 446 AD Irish pirates burned the college to the ground. An unlikely story says that St Patrick was kidnapped from Cor Tewdws by the pirates.

Around the year 508 AD St Illtud re-founded the deserted 4th century college, prompted by St Dubricius of Llandaff. The 'new' college became a centre for learning and many early Celtic saints studied there, including St David, St Tudwal, and Gildas, the historical writer. The college school stood on the north side of the current churchyard.

Danes sacked the Celtic college in AD 987, but a more profound change came with the Norman invasion in the late 11th century. The Norman lord Robert Fitzhamon sacked Llantwit Major's college and gave its estates to Tewkesbury Abbey. Around 1100 the Normans built a parish church on the college ruins. 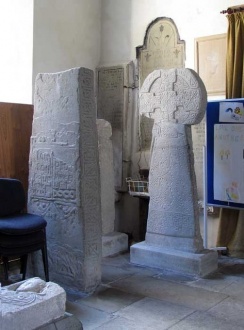 The Norman church was rebuilt in the 13th century. A new eastern chapel was added to serve the monastery, while the old western chapel continued as the parish church. Sir Hugh Raglan enlarged the west chapel around 1400 to create a chantry for himself and his family. This chantry is now known as the Galilee chapel.

The monastic community was dissolved at the Reformation, and the east chapel became the parish church. The main body of the church was allowed to decay, and the west chapel was used for storage.

The building was not fully restored until the 20th century. It is essentially 2 separate buildings; the Norman west chapel and the 13th century east chapel, or monastic church. Other monastic ruins remain around the church, including a pigeon house, a 13th century gatehouse, and ruined walls in the nearby garden.

The west chapel houses effigies of medieval priest's effigies. Look for the carved inscription to the 9th century king Rhys ap Arthfael of Morgannwg. The east chapel retains its stone benches and medieval wall paintings, including a likeness of St Christopher dated to around 1400 AD. There is also a royal coat of arms to James I dated 1604.

St Illtud's would be well worth visiting just for these historic features, but most people come to see the wonderful collection of Celtic stones, now housed in the restored Galilee Chapel.

Most of the collection of 9th-10th century stones at Llantwit Major were commissioned by important nobles and church officials connected with the Christian community here. One of the most important is the Houelt Cross, a beautifully decorated wheel cross with a Latin inscription at the base, reading, 'In the name of God the Father and of the Holy Spirit. Houelt prepared this cross for the soul of Res his father'. This probably refers to Hywel ap Rhys, king of Glwysing, who died in 886 AD.

Another important carved stone is The Samson Pillar, or King's Stone, by far the oldest of the carved stones. The entire front face of the cross is filled with a long Latin inscription to Abbot Samson and Iuthahel (Ithel), a 9th century king of Gwent. The story of how the stone was discovered is fascinating. According to the story, it once stood in the churchyard. A local man named Will the Giant died and his grave was dug beside the stone.

After the oversized corpse had been lowered into the grave, the stone toppled and fell in. It was so big that no one could move it, so the stone was left in place and covered over. It was only rediscovered in 1789 by the antiquarian Iolo Morganwg.

One very unusual stone is a cylindrical pillar, one of a pair that were perhaps part of a very early stone chancel screen.

Note
You will often see the church referred to as St Illtyd's, with a letter 'y'. We've chosen to use the spelling Illtud, which is used by the official church website. The church and stones are open daily to visitors. 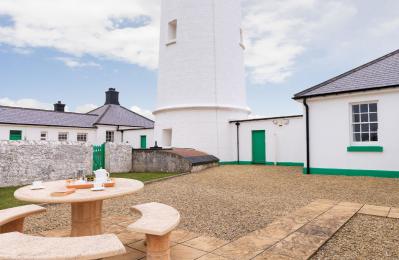 This inviting end-terrace cottage is situated in the village of Llandow in Wales and can sleep two people in one bedroom.
Sleeps 2