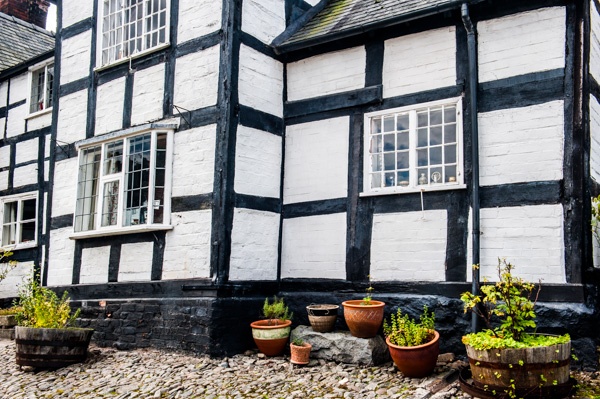 Montgomery is a pretty town on the Welsh border with England, set in the idyllic countryside of the Vale of Montgomery just one mile from the border. The town stands close to the confluence of the River Severn and two of its most important tributaries; the rivers Camlad and Rhiew.

The town grew up near a ford across the Camlad, traditionally regarded as the point where England and Wales met. An Iron Age fort guarded the ford, and the Romans recognised the strategic importance of the site when they established a fort nearby that was occupied for almost four centuries.

It is unusual that a town's history can be so precisely dated. Montgomery began around the year 1070 when William the Conqueror granted lands in the area to a Norman knight named Roger de Montgomerie as a reward for his support during the Norman Conquest of England four years earlier.

Montgomerie erected a simple motte and bailey castle to defend his lands from the restless natives. He chose the location for his fortress with care and selected a hilltop site overlooking the strategically important ford on the River Severn. He named the castle Montgomery after his home in Pays d'Auge, Normandy.

When Roger's son Robert rebelled against King Henry I in 1102 the castle was granted to Baldwin de Boulers. The town's Welsh name of Trefaldwyn translates as 'Baldwin's town'. 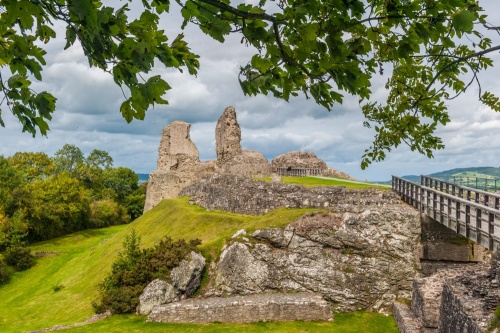 That early Norman motte was a relic of the past when Henry III came here in 1223. He decided to replace the earth and timber fortifications with a new stone castle, incorporating modern theories of defence.

A new planned town was laid out below the castle, on a grid of streets, centred around a wide market place and defended by a high town wall. The town layout has changed very little in the intervening 8 centuries. The town population grew quickly and just 4 years later in 1227 Montgomery was granted a royal charter to hold regular fairs and markets.

The next major event in the town's history came in 1267 when the Treaty of Montgomery was signed here between Llywelyn ap Gruffudd and Henry III.

The English king must have been gritting his teeth at having to sign the treaty, which acknowledged Llywelyn as Prince of Wales, though it did require Llywelyn to acknowledge Henry as his feudal overlord. Unfortunately for Llywelyn and Wales, Henry's son Edward I invaded Wales in 1276 and eventually took control of the entire country.

The 13th-century town wall proved ineffective against the forces of Owain Glyndwr in 1402. Glyndwr's men sacked and burned the town but were unable to capture the castle, which was then owned by the powerful Mortimer family, Earls of March. 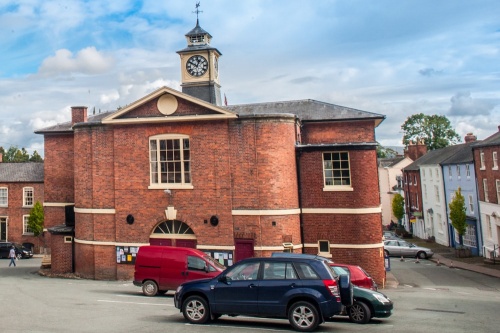 When the last of the male Mortimers died in 1425 the castle and its estates passed to the king. When Henry Tudor, a Welshman, took the throne in 1485 he granted the castle to the Herberts, another powerful Welsh family. One of the most famous of the Herberts was George Herbert, a cleric and poet.

The town suffered during the Civil War when the bloody Battle of Montgomery saw a comprehensive Parliamentary victory. Parliament ensured that the castle could never be used against them in 1649; the walls were pulled down and the medieval fortress left a romantic ruin. Today the hilltop site is under the care of CADW and is well worth exploring.

The character of Montgomery was transformed in the 17th and 18th centuries, giving it a decidedly Georgian atmosphere, though several excellent examples of earlier timber-framed buildings remain. The Town Hall was built to replace the medieval Market Hall in the centre of the main street.

The town centre is full of interesting historic buildings, including the Dragon Hotel, a former 17th-century coaching inn. There are 141 listed buildings in Montgomery, including the Town Hall, built in 1748 by William Baker of Audlem and remodelled in 1828 for Lord Clive. The ground floor served as a market, with a first-floor chamber reserved for Quarter Sessions and meetings of the Borough Corporation.

On a hilltop opposite the castle stands the Montgomeryshire War Memorial, commemorating the dead of World War One. 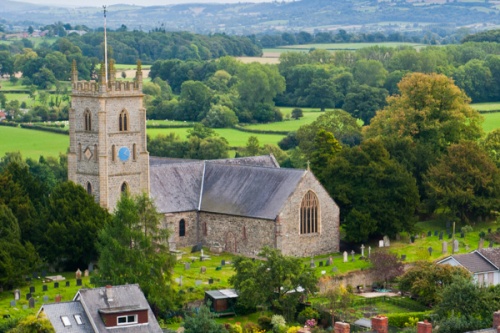 The pretty parish church of St Nicholas dates to the 13th century. It retains its original medieval rood screen, decorated with carved figures of angels. Look for the ornate memorial to Richard Herbert (d 1593). The choir stalls, screen, and misericords were brought to Montgomery from Chirbury Priory after it was suppressed by Henry VII in the Dissolution of the Monasteries.

Another highlight is the tomb of John Davies, executed as a highwayman in 1821. His final resting place in the churchyard is known as The Robber's Grave.

The historic 16th-century Old Bell Inn on Arthur Street has been converted into a local heritage museum run entirely by volunteers. Exhibits are spread over 11 rooms and tell the story of Montgomeryshire, the Norman and medieval castles, the Cambrian Railway and the Montgomery Workhouse. One chamber shows how traditional timber-framing techniques were used to construct the museum building itself.

One usual exhibit is a 13th-century wooden bucket discovered 100 feet down the castle well during excavations. There is a very small entry fee and plenty of free parking along the street.

More self catering near Montgomery, Powys

Self Catering near Montgomery