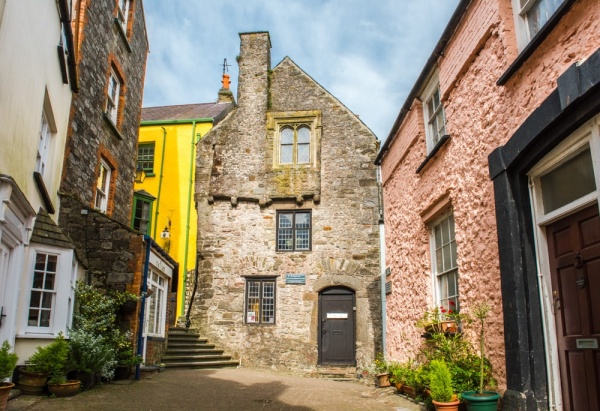 The Tudor Merchant's House is a late 15th century middle-class town house furnished as it was in 1500, and featuring a great fireplace and authentic period furniture and household objects.

The stone house was built shortly before 1500 for a successful merchant dealing in cloth, coal, pots, spices, and vinegar. It is the oldest house in Tenby and a reminder of the days when Tenby harbour was a bustling centre of trade.

The ground floor of the house was used as the merchant's shop and a kitchen. On the first floor is the hall; the main family living area, and from here stairs lead up to the second floor, with a single bedchamber tucked under a low-beamed ceiling supported on dark timbers.

There is an ornately carved four-poster bed in the bedchamber, and wonderful views across the rooftops of Tenby from the mullioned windows. In a tower jutting out from the side of the building is a small garderobe, or loo. There are traces of wall paintings on three of the interior walls. Behind the house is a small herb garden.

The house as we see it today is not exactly as it would have been in 1500; for one thing the original house would have had an external stair to upper floors, but modern visitors can ascend via an inside stair.

The National Trust has gone to great lengths to make bring the flavour of Tudor life home to visitors. The table is in the hall laid for a meal, and there are guides on hand to explain about 16th century customs, including table manners and social etiquette. And of course there the requisite period costumes for children to try on!

Finding the Tudor Merchant's House is very easy. It is well signposted with pedestrian signs across Tenby. It is quite literally just a few steps from the old harbour. There are three floors to explore. The ground floor holds the National Trust reception area, which leads directly to the kitchen.

Off the kitchen is the garderobe, and from the back wall of the kitchen a door leads to the garden. The original garden was much bigger and would have extended down to the harbour. What we see now is just a fraction of its original size.

From the kitchen a set of internal stairs leads up to the hall, laid out with several tables for dining and a desk for writing. Another set of stairs leads up to a single bedroom on the top floor, furnished with a large four-poster bed.

The National Trust volunteer stewards were simply outstanding. We were spellbound by their stories of the house, its history, and its inhabitants.

We found the house very atmospheric, and the location, tucked away in a little paved yard, made it seem like we were stepping back in time. We've visited twice and each time were truly impressed by the Tudor atmosphere and the excellent historical information.

Immediately beside the Merchant's House is the house where artist and author Charles Norris lived from 1805-1821, Norris was best known for his 'Etchings of Tenby'. Look for the plaque on the side of the pink building facing the Merchant House's front door. 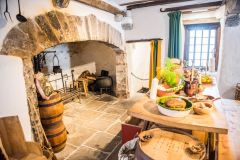 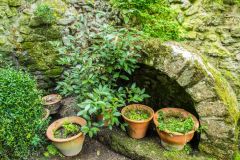 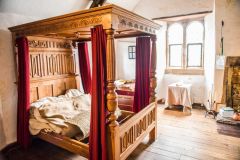 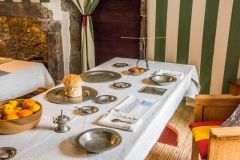 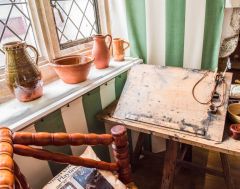 South Beach at The Hideaway 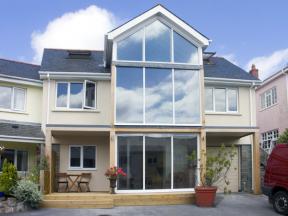 With two bedrooms, this light and airy flat is able to sleep four people and provides a spacious open-plan living area, a feature spiral staircase and a balcony.
Sleeps 4