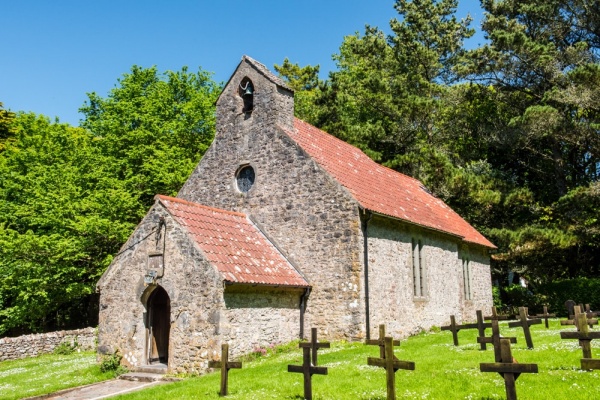 The medieval church of St David stands on the foundations of a 6th century chapel built by the monks of Caldey Priory, and on the site of a Pre-Christian burial ground.

There are two historic churches on Caldey Island. One, St Illtud's, is part of the medieval priory that once flourished here. The other, St David's, is the parish church for island residents. The church was once known as St Mary's by the Seashore, which seems odd when you consider how far inland it stands. The puzzle is solved when you realise that the village grew up around a tidal inlet, but in time the inlet became silted up, leaving the church far from the shore.

A small Celtic chapel was established on a hilltop site here in the 6th century, but the site was in use as a Roman-British burial ground as much as 500 years prior to that. It is quite likely that people from the Pembrokeshire mainland were brought to Caldey Island for burial, following the Celtic belief that islands represented a link between earth and the afterlife. Thus the Celtic chapel was founded on a site already considered sacred. 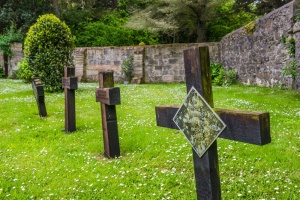 The burial ground with its
distinctive wooden crosses

After a Norman priory was established on Caldey around 1131, the monks rebuilt the Celtic chapel, incorporating stonework from the 6th century building in the nave of the new church. The medieval church also reused the foundations of the Celtic building.

Throughout the medieval period there were strong links between the priory and St David's church, and after Henry VIII dissolved the priory in the 16th century the church was allowed to decay. It was used for secular purposes, and for a time served as the local smithy. It was restored in 1823 by Cabot Kynaston, but the real changes came after Caldey Abbey was re-founded in the early 20th century.

The Benedictine monks from the new abbey inserted a series of striking stained glass windows in the medieval church. The windows were designed by one of the monks, named Dom Theodore Bailey.

The windows cover a wide variety of Biblical themes, with figures of St David of Wales standing beside King David in one pair of panels, and an unusual Fish Window based on the early Christian symbol of a fish. The most striking window of all is a circular Tree of Life design, with a threefold tree design. What is most striking about the windows is the vivid use of colour, which floods the interior of the church on sunny days.

The church is extremely simple in design. There is a west porch leading directly into the nave. Over the porch is a small circular window and at the top of the west gable is a bellcote for a single bell. Aside from the stained glass windows the church is worth visiting for its Norman west door.

Simple wooden crosses in the graveyard mark the graves of both islanders and monks. It is remarkable to think that the modern crosses stand on a site where Pre-Christian inhabitants were buried 2000 years ago. The church is well signposted and stands just a stone's throw from the modern abbey church.

Caldey Island is reached by a regular boat service from Tenby harbour. There is a ticket kiosk at the harbour, and boats leave about every 20 minutes. Note that access is usually limited to the Easter-October season. 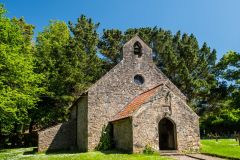 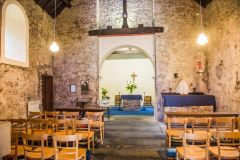 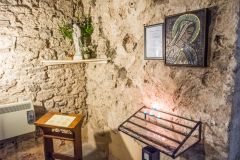 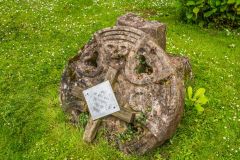 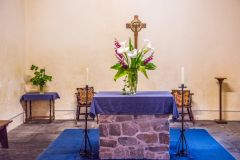