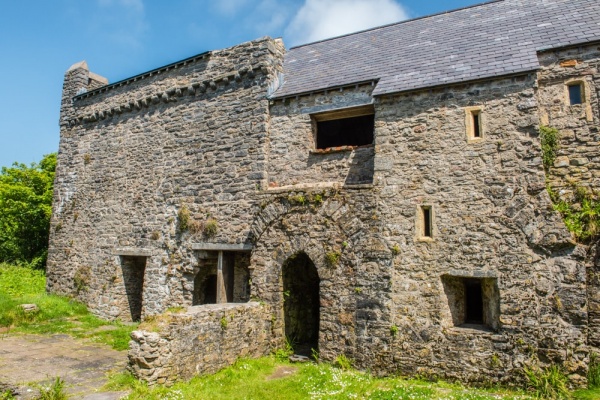 Caldey Island has had some form of monastic community since the 6th century when a disciple of St Illtud founded a monastery here. A Tironian priory followed in the 12th century here, and the priory church, with its peculiar twisted spire, has survived, along with most of the monastic buildings.

In the 5th century a follower of St Illtud named Pyro founded a monastery on the small island of Caldey, off the Pembrokeshire coast. The island's Welsh name, 'Ynys Pyr', is said to derive from Pyro's name. Pyro was said to be fond of drink, and one night he imbibed too much wine. While staggering back to his bed, he fell into the monastery well, and was discovered dead the next morning. The misadventure did not stop him being considered a saint, however!

Viking raids eventually drove off the monks, but when the Normans conquered south Wales in the 12th century the new Norman overlord, Robert Fitzmartin, granted the island to his mother, Geva.

Around 1131 Geva established a new monastic community of monks following the Tironian order, as a daughter house of St Dogmael's Abbey. The priory never grew to any great size, indeed, there may only have been a single monk here by the end of the 12th century. Nevertheless, the priory survived until the Dissolution of the Monasteries in 1536. Henry VIII's commissioners found only a solitary monk in residence, and assessed the priory's annual income at just 5 pounds.

Perhaps because of its island location most of the monastic buildings are still standing. It is rare to find such a complete monastic layout in Wales. It is, in fact, possible that the layout echoes the original pre-Norman monastery plan. To the north of the church is a small cloister, with residential buildings grouped around it. The main entrance was in the south-west corner. 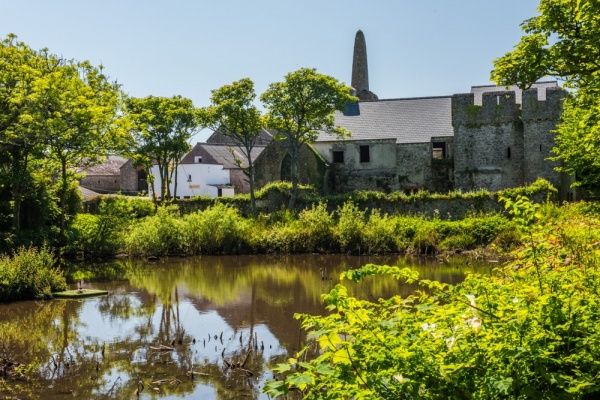 The priory across its mill pond

There was a guest room over the gatehouse in the west wing, and a dormitory in the east wing, over a kitchen and warming room. To the north was a refectory, or dining area, linked to the warming room by a passage. In the north-east corner was a tower holding the Prior's lodging. Of this complex of buildings only the refectory and part of the west wing have disappeared, making the Caldey Priory remains among the most complete anywhere in Wales.

Some of the medieval monastic buildings were used as farm buildings after the Dissolution.

The priory church, dedicated to St Illtud, survived. It is still a consecrated building, and is notable for its twisted spire, the result of subsidence. The interior of the church is open to visitors, but unfortunately the interiors of the other monastic buildings are closed.

In 1906 a new Benedictine abbey was founded, with a completely new set of monastic buildings designed by John Coates-Carver, an architect from Penarth. The style he chose was traditional Italianate architecture, which certainly does stand out in a very Welsh island setting!

The Anglican community converted to Roman Catholic practice in 1913. Financial problems forced the community to sell the site in 1925 and the community moved to Prinknash Abbey in Gloucestershire where they still thrive. A new order of traditional Trappist monks from Scourmont Abbey in Belgium moved in beginning in 1929.

The Cistercian abbey managed to survive, in part because the monks developed a reputation for producing high-quality perfume, as well as cheese, shortbread, and chocolate. The abbey welcomes visitors for spiritual retreats.

Aside from St Illtud's church at Caldey Priory there is another historic church on Caldey Island, dedicated to St David, a short distance from the modern abbey.

There is a regular boat service from Tenby harbour, operating on a seasonal basis - usually from Easter to October. You can buy a return ticket from the Caldey Island kiosk at the harbour, and boats sail every 20 minutes. The exact departure point varies depending on the tide. 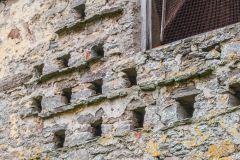 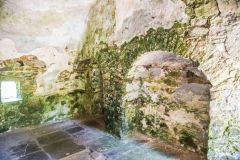 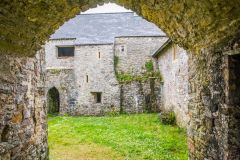